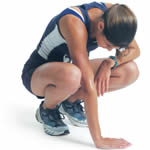 It seems that many people throw the term “overtraining” around without actually knowing what the term truly means in the world of sports medicine. It’s actually quite a controversial syndrome. Some researchers even question if overtraining exists because a majority of research that has been conducted in this area investigated overreaching versus overtraining1. One of the major problems associated with research in this area is the lack of common and consistent terminology. For the purpose of this article I will use the terminology from Halson and Jeukendrup:
You might also hear people call overtraining syndrome the following: chronic or persistent fatigue (overfatigue), physical fatigue (staleness), emotional exhaustion (burnout), excessive use (overuse) and excessive work (overwork)2. All these different terms have caused confusion and difficulty when a diagnosis is needed.
Overtraining occurs due to an imbalance between stress and recovery2. It other words, if your body is being stress through training and then not properly allowed to recover than you are putting yourself at risk for overtraining. However, several researchers have found that other stressors, such as psychological, lifestyle, malnutrition, and infection, may also be responsible for under-performance3.
True overtraining is actually relatively rare. Gould et al. conducted a study of 296 athletes from 30 different sports at the 1996 Atlanta Olympic Games. The study showed that 84 athletes (28%) were in overtraining2. In another Gould et al. study, it was observed that 8 out of the 83 American Olympic athletes (almost 10%) from 13 different sports at the 1988 Winter Olympics in Nagano reported to be in overtraining2. However, other factors may have been contributing to the athletes under-performance, such as excessive trips, decrease of resting periods, and jet lag2. A consensus of researchers have suggested the incidence rate of overtraining to be between 7% and 20%3.
Athletes, especially endurance athletes, often engage in very hard training persistently to achieve better performance without being aware of the fact that physiological improvements in sports only occurs during the rest period following hard training2. A smart athlete and/or coach will include recovery in a training plan. Generally, one’s race season can be broken down into segments known as macrocycles consisting of: general conditioning (base phase), specific preparation, peak (competition cycle), sport-specific(usually after tri season), and regeneration phase (rest & recovery)4. Within each macrocycles are microcyles, which usually consist of several weeks of hard training followed by a recovery week of a reduced training load to allow for the body to response to the previous weeks of hard training. If training is not done correctly an athlete may suffer a physical or emotional injury and/or possibly overtraining.
Numerous signs and symptoms of overtraining have been identified but not all of them are necessarily present in each overtrained athlete. Also, just because an athlete might present any of the symptoms of overtraining does not mean he or she is overtrained. The ultimate determination of overtraining is if performance is impaired or plateaued3.
Symptoms of Overtraining:
The above list is only a sample of possible signs and symptoms of overtraining. It is important to note that excessive training is rarely the only reason for overtraining. Various factors such as general health and nutritional status, mood, personality type, age, medical conditions, socio-economic and psychological stressors, training history, environmental conditions, sleep, and drugs can all increase vulnerability to the overtraining state3.
There are several possible underlying causes of overtraining syndrome and how the overtraining processes are initiated theories that have been suggested by researchers. These include: the Glycogen Hypothesis, the Central Fatigue Hypothesis, the Glutamine Hypothesis, and several other theories3. Diagnosis of overtraining syndrome is very difficult. Currently several markers (hormones, performance tests, psychological tests, biochemical and immune markers) are used, but none of the markers are generally accepted because they vary depending on the athlete5.
Overtraining is rare, but an athlete can take steps to prevent it. The following are suggestions from several researchers:
The key lesson to take away from this is that the physiological improvements in sports only occurs during the rest period following hard training. So train hard and recover hard!
References
Happy Training!

One thought on “Overtraining: The Facts”