In a nutshell I had an AWESOME race!

But, first, let’s discuss some pre-race stuff. My first half marathon was the Harvard Pilgrim Maine Coast Half Marathon, aka All Women and One Lucky Guy on November 7, 2010. Leading up to that race I was nursing a small tear in my right rotator cuff and also succeed in getting a rather nasty sinus infection/head cough two weeks before the race that left me in bed all day for several days (and it takes A LOT for me to stay home from work/school). I started feeling slightly better a few days before the race and since I had done all the training and paid for the race, I planned on doing it. Running a half-marathon was one of my goals for 2010 and I was damn determined to do it. I’m the type of person when I say I’m going to something, I’m going to do it even if it kills me. I “ran” the race. It was miserable. I just wanted to die half way through the race. I averaged 11:53/mile for a finish time of 2:35:44. I should have stayed home in retrospect, but I did the damn race more or less for my ego.

Fast track to the Mid Winter Classic 10 Miler in Cape Elizabeth in February. Once again I got a sinus infection the week before the race, but decided to run again (can you see a pattern yet?). I felt really good till the half point when I thought I was going to pass out. I highly considered a DNF at this point, but I kept going because I was determined to finish. I averaged a 10:30/mile for a finish time of 1:45:08. I pouted about the race for a little while because I was super disappointed in my performance. I had been running really well in my training runs leading up to the race and I was expecting to have a great race. It didn’t happen. I whined and then a friend reminded me that shit happens and my big races are in the summer and I shouldn’t worry about a bad race in February. He was right and I was over it.

On March 4th, I ran the Irish Rover 5k in Portland. It was my first 5k in close to 2 years. It was an awesome race for me! I pushed myself to a pace that I never thought that I could ever race at and finished with a HUGE PR! I realized that I CAN actually run fast! That PR definitely put running into a more positive light for me. My long runs were becoming, dare I say, fun. I looked forward to them on the weekends. About a month ago my coach had me run some race pace intervals during my long runs. She wanted me to target a 9:05-9:10 pace. I tried and it hurt. I told her I thought she was crazy and I couldn’t do it. A pace of 9:25-9:30 felt more realistic. So we targeted that pace for the last couple of long runs leading up to Race the Runways.

I’ve been dealing with a lot of stress over the past month from work, school, and my personal life. It has taken some what of a toll on my body, but mostly my mental and emotional state. The only thing that has kept me sane (and probably out of the looney bin) has been my training. A few weeks ago I had the most amazing 40 minute easy run during my last recovery week. The night before I emailed my coach to tell her I needed a “mental health” day and I was skipping my trainer ride. I was exhausted, I had major headache, and I was just plain cranky. The next day I went out for my run and all those negative feelings just disappeared. My first two miles of the run were at about a 8:30/mile pace and it just felt like a super easy 10:00/mile pace. I felt in love with running during that run. For the first time in my life, I was actually able to forget all my problems and pain with running and just be “one with the pavement.” It was truly an amazing experience and one that I really needed. It was like I mentally hit a reset button and all the shit going on in my life didn’t matter.

Going into the race yesterday I was very calm and collected. I was not nervous and, honestly, I just wanted to get the race over with so I can get on with my training and long bike rides coming up! 🙂 The race started late. The temperatures weren’t bad, around the mid-40’s. It was cloudy, but the sun would come out occasionally and it would be “hot.” The wind was brutal though. It wasn’t bad during most of the course and I actually welcomed it during the middle miles when I was getting hot. But on that runway, it was brutal. The race takes place on the old Brunswick Naval Air Base. The first mile actually starts on the runway then you head out onto the base towards the air control tower, do two loops here, then head through some residential areas, head towards the golf course and then finally finish on the runway. The course is flat, except for one tiny hill at about mile 11.5.

My race goal leading up to the race was to run about a 9:20 pace throughout. But on Friday, I pretty much said “F@ck that. I’m going for 9:05 pace!” I wasn’t sure if I could do it, but I told myself I could and I was ready to go for it. Sometimes, it’s all mental. I went out for about a 9:00/mile and I told myself just to hold on for dear life. The first couple of miles were a little crowded but I was able to find space quickly. I ran at my own pace till about mile 3 where I saw a training partner, Sarah. She was running about a 9:00/mile and I just hopped in with her and kept her company for a majority of the race. We didn’t really talk, but it was nice to have her to keep me motivated. The middle miles were a little fast, but I felt good so I just went with it. I was feeling really good about mile 4ish and I just wanted to run. But, I told myself to rein it in because I still had 9 miles to go.

Mentally I was really relaxed and just enjoying watching people run by (and can I say some people have a very interesting run gait. One girl who was running in front of me for awhile was running on her tip toes. It was kind of weird and I totally passed her around mile 11). At about mile 7, I was mentally getting bored and just wanted to be done. I took my gels at the right time and water at almost all the stops. Around mile 8 we started to run in the residential area and I couldn’t help to think about all the empty houses and building on the base now that it is closed. I really hope that they will do something useful with the housing. Perhaps, low income housing? Around mile 9 a woman came up behind Sarah and I saying she was targeting my red jacket for 3 miles and it was her goal to reach us. It was kind of nice to hear someone say that they had a target on my back and to use me as motivation to reach their race goal. I reached the 10 mile mark under 1:30 so I knew I could do sub-2 hour, which really was my goal for the day. I lost Sarah around this time. My tummy was starting to get a little crampy at this point so I didn’t take my last gel at 1:40. I also knew that I would be done with my race in about 15 minutes so I didn’t think it was really needed.

When I reached mile 11 I could see the finish line in front of me, but you have to do a quick out and back lap to the golf course. The little hill at 11.5 was enough to say this sucks, but I pushed through it and passed a few people. I tend to run better (aka faster) during the last part of the race because I know that the finish line is in sight. At mile 12 you head back onto the runway to the finish line. As soon as you turn onto the runway, the headwind just hits you like a brick. It must have been a 20-30 mph wind gust and it was cold! It was a total mind fuck. I just wanted to get to the finish line quick, but I wasn’t moving quick because I was working against the wind. Two guys passed me with about a half mile to go and I tried tucking in behind them to stay out of the wind, but the wind just cut right through them and me. Finally, the finish line was in sight. I tried picking it up and I did have enough kick left in me pass the two guys who passed me earlier. But, I definitely left everything on the race course, which was good! 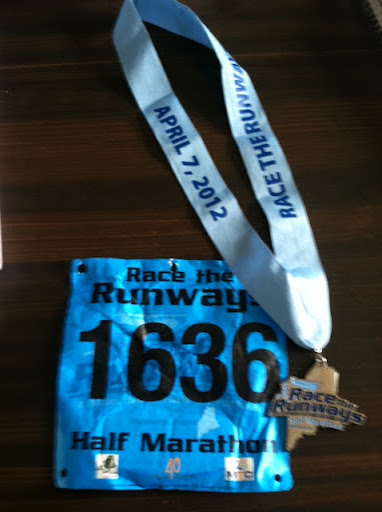 Here’s my Garmin mile splits, but my Garmin and the race course were definitely off. My coach wrote a blog post on Thursday about how Garmin’s usually read a slightly faster pace and a longer mile than the real course. I was aware of this and tried taking that into account during my run. However, I do think that actual race course was slightly off. My Garmin read most miles long, but still apparently came up short in the end. Interesting…

Overall, I’m a very happy girl at the moment! And now it’s time to focus on my build for Mooseman 70.3 on June 3rd. Yikes! Less than two months to go!