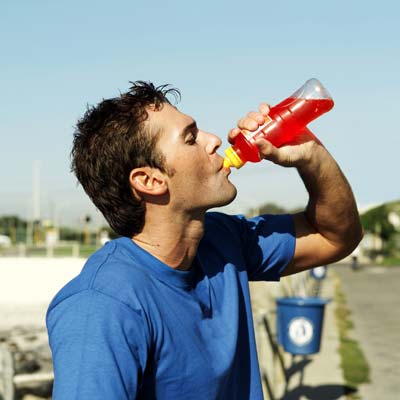 Just about any athlete (and even many non-athletes) drink sports drinks while working out. And not all sports drinks are made equally.
I recently read an article (Ultra-Endurance Exercise: The Emerging Role of “Multiple Transporter” Carbohydrates) in the Sports Nutrition Insider and became very interested in the recent research on the subject since it’s so important to endurance athletes. I actually posted the article of my Facebook page, but I doubt anyone who read it would understand it. It’s a really great overview of the subject; however, if you don’t have a background in chemistry or physiology it’s a bit hard to understand.
Numerous studies have found that consuming carbohydrate (CHO) during prolonged moderate- to high-intensity exercise can postpone fatigue and enhance exercise performance when the exercise duration is greater than 45 minutes (1). These effects due to CHO consumption are largely attributed to a prevention of hypoglycaemia (low blood sugar) and the maintenance of high rates of CHO oxidation in late exercise when muscle and liver glycogen levels (endogenous sources) are low (1). Athletes consume CHO as exogenous sources in hopes to “spare” the endogenous sources.
The average 150-lb male has about 1800 calories of carbohydrate stored in the liver, muscles, and blood in approximately the following distribution (2):
As the carbohydrate in the muscles get used during exercise, the carbohydrate in the liver gets released into the bloodstream to maintain a normal blood glucose level and to feed the brain (very important!) and the muscles. When your glycogen stores get low, you hit the wall – or “bonk.” In one study, cyclists with depleted muscle glycogen stores were only able to exercise for 55 minutes to fatigue. However, with full muscle glycogen stores they could exercise for about 120 minutes to fatigue (2). Also, trained muscles have the ability to store more glycogen than untrained muscles (32g v. 13g) (2).
As you deplete carbohydrate from muscle glycogen stores during exercise, your body will increasingly rely on blood sugar for energy. By consuming carbohydrates during exercise via sports drinks, gels, bars, etc., your muscles have an added source of fuel. Sports drinks also help maintain normal blood sugar levels. A normal blood sugar level is important to keep your brain fed and help you think clearly, concentrate well, and remained focus. Have you ever been out training and start to lose focus and feel light-headed? That’s a sign of bonking and that your body needs carbs to function!
Now, when CHO is ingested, it is absorbed through the intestines into the bloodstream to be carried throughout the body and delivered to cells for energy. Studies have indicated that the peak oxidation rate for exogenous CHO is about 1 g/min (1). It has been suggested that the absorption capacity of glucose in the intestine is the limited factor for the oxidation (think metabolism of CHO) of ingested glucose.
Numerous studies have compared the oxidation rates of various types of ingested CHO with the oxidation of exogenous glucose during exercise. The oxidation rates of ingested maltose, sucrose, glucose polymer, and maltodextrin (glucose polymers derived from starch) are all similar to the oxidation rate of ingested glucose (1). However, significantly lower exogenous CHO oxidation rates have been reported for fructose (about 20-25% lower) and galactose (about 50% lower) compared to glucose (1). One of the possible reasons that both might be lower is the fact both fructose and galactose have to be converted into glucose in the liver before they can be oxidized (1).
Glucose and other sugars don’t just magically float through the walls of the intestine into the bloodstream. Glucose must be transported via the sodium-dependent glucose transporter (SGLT1) across the intestinal wall. Studies have indicated that it is possible that SGLT1-transporters are saturated at a glucose ingestion rate of about 1 g/min, because studies with higher glucose ingestions rates do not yield higher oxidation rates (1). Now, for all you non-science geeks out there, let’s put this in layman’s terms. Imagine that your at a football game and it’s half time. You and everyone else has consumed lots of beer. Now that it’s half time, everyone is making a beeline to the bathroom. There are two bathrooms with only 4 stalls each. There are 1000 of you trying to use those 8 toilets. Since you all are all decent people with manners, you decide not to drop your trousers and pee in the middle of the hallway, but wait in a very long line to use the toilet. This is kind of what is happening in your intestines when you consume glucose from your sports drink. There is only so many SGLT1-transporters for glucose in your intestine. Of course, glucose has to have manners too and can’t just go up to another transporter molecule and say “LET ME IN!” It has to wait patiently in line for it’s turn to use the “toilet” too.
Now, fructose is lucky because he decided to buy a sky box seat and thus has his own totally awesome bathroom. Fructose is absorbed from the intestine by GLUT-5, a sodium-independent facilitative fructose transporter (1). Several recent studies have found that a sports drink containing both glucose and fructose can enable exogenous CHO oxidation rates to reach peak values of about 1.5 g/min (3). What is also very interesting is that with an increased CHO oxidation with multiple transporter carbohydrates there is also an increased fluid delivery and improved oxidation efficiency that reduces the likelihood of gastrointestinal distress, an endurance athlete’s worst nightmare (3)!
Let’s talk sports drinks now! There are many different sports drinks available in market today and each one is slightly different. The biggest variables between sports drinks are (4):
See Part II tomorrow! 🙂
~Happy Training
References

One thought on “Nutrition Tuesday: What’s In Your Sports Drink? Part I”