This week has had a few ups and downs. I started the week off feeling pretty great after a decent race on Saturday and then a lovely 65 mile bike ride on Sunday. My body was feeling pretty good after those efforts. I was a bit sore, but with a little form rolling and lacrosse ball use nothing that didn’t linger long. However, I’ve been having a bit of soreness in my right hip area. The area right around the ball and socket joint. Nothing extremely painful. It never really bothered me while working out. But, it was just a touch sore in the area.

I did some running hill work and an ocean swim on Monday followed by my first track workout in over a year on Tuesday. I was super pumped for the track workout! In a strange way, I enjoy the pain that you get while running intervals on the track. I always hate them during the workout, but afterwards I feel like I had a good, hard workout! After work I headed to the local high school track. It was around 5pm at this point, but still about 90 degrees and humid out! I started with a 2 mile warm up, followed by 2 x 400 at faster than 5k pace with recovery laps between, 4 x 200 at faster than 5k pace and sprinting to finish with recovery laps between, and ended with a 1 mile cool down. I got through most of my workout before a herd of kids began showing up. Apparently the youth track team meets around 5:30-6:00pm. I usually switch up my directions between laps, but with a ton of kids running around I didn’t quite have that luxury. I managed to finish most of my workout before the little 5 year olds began running laps around me! Some of those kids, I swear, were gazelles! I did my one mile cool down on the road. During the workout my right hip was definitely hurting some. Not enough to stop what I was doing, but enough that I should have probably stopped and just run on the roads. Clearly, hips injuries and tracks are not a smart idea.

I headed home and stretched and foam rolled some more. My hip was sore, but nothing that I was super concerned about. I had to work Wednesday evening so my women’s ride was cancelled, but I was still planning to hit the pool before work. I woke up at 5am and pretty much fell out of bed. My right hip was all locked up! Crap! For obvious reasons, I didn’t swim. I did some light stretching and headed to work for a very long day. I called my chiropractor as soon as they opened to get an emergency appointment. I wasn’t 100% sure what was going on with my hip. I’ve had right hip problems previously because my pelvis was out of alignment, but this was a new pain. The primary pain was concentrated right around the ball and socket joint, which really concerned me. The first available appointment was Thursday morning.

On Thursday, my totally awesome Chiropractor fixed my hip after some very painful proding and stretching. Basically, all my muscles within the lateral hip area seized up on me because they were super tight. I usually have a high pain tolerance, but when she used her graston tools on those muscles, holy hell that hurt! I was close to tears. She thinks that all the tightness in the area began with my hip flexor and then radiated to all the other muscles. 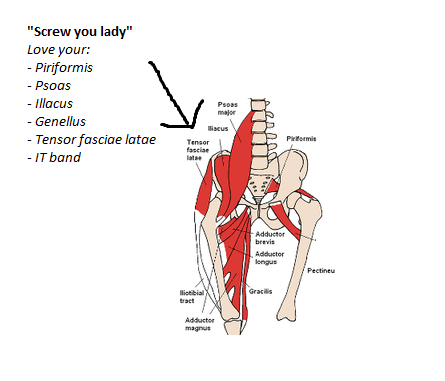 I took Thursday off as a rest day too to ensure I didn’t do further damage to the region. I was surprised that immediately after the appointment I already felt relieve! My hip feels much better today and I plan on doing my big brick workout tonight after work on the Rev3 course again!

I’m super excited about heading to Lake Placid tomorrow morning for race weekend. With all the Ironman talk on Facebook I’m getting super giddy. I can’t wait to watch all my new Tri friends kick butt on Sunday and become Ironamen and Iron(Wo)man! It’s very inspiring to say the least and I’m also a bit envious. I kind of wish I was racing too. But next year!