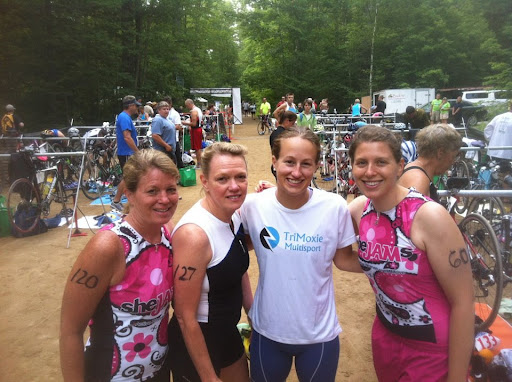 On July 14th I raced the Norway Tri sprint tri. It had a 0.62 mile lake swim, 11 mile bike, and a 3 mile trail run. If you recall, I had a really bad summer cold leading up to the race. I was feeling about 85% better so I decided to race (although I have a tendency to run races while sick. Really not a brilliant idea).

Race morning was uneventful. Woke up early, ate breakfast, and drove over an hour to get to Norway. The race is small. It’s capped at 150 individual athletes/teams because they can over fit 150 bikes in transition. I got at the race venue with plenty of time to pick up my race packet, met Angela (the other TriMoxie coach and rockstar triathlete!), and mingle around. I met up with Laura who was doing her first triathlon and a few other ladies. I only listened to about half of the pre-race meeting before hitting the bathroom and a quick warm-up swim before the start. The water was super warm and thus the race was deemed wetsuit illegal! I was super pumped about this because I was planning on not wearing my wetsuit even if the race was wetsuit legal (even though my coach told me to wear it because I’d be faster). Norway wasn’t originally on my race schedule, but I added it because I wanted to redeem myself from the Tri for the Y sprint in May where I missed the podium by about 30 seconds. I’m still mad at myself about that…

Since it was a small race the swim waves were relatively small. I was in the second wave. The gun went off and so did Angela. I’m pretty sure I blinked and she was at the first buoy! I started in the front on the outside. This swim was a clockwise swim while just above every triathlon the swim is done counterclockwise. It was a little odd to be swimming in the opposite direction. I quickly swam to the front on everyone and had a ton of open water to myself. The first buoy seemed to be a long way away and honestly I wasn’t quite in the mindset to race. I kept having negative thoughts, which is never a good thing in a race. But, somehow I always tend to have them during the first part of every swim. I thought about just giving up, drowning, and being eaten by a giant turtle. Why? I have no clue! It’s just when I’m swimming those are my thoughts. I know people who are afraid of sharks, jellyfish, seaweed, etc. Nope, usually I think about dead bodies being tied to chains and cement mafia style. Again, no clue. Anyway, The first length of the swim was bad. I thought about quitting. I passed a few men who started in the first wave that started 3 minutes before us then hit the first buoy. There was one women who was in front of me. I drafted off of her for a few strokes or so. I finally found my groove and just swam. It was a long swim and it felt like forever. I was pretty much alone except for the woman in front of me. We rounded the last buoy and headed home. I swam until my hand hit the bottom of the lake and ran out of the water. The run from the beach to transition is quite long and is on a rocky/sand path. Most people brought shoes to put on. I ran bear foot. I actually didn’t run. It was more of a jog. I was feeling pretty nausea and yicky coming out of the water and again was thinking about quitting. I told myself that I would feel much better on the bike. The swim times included the long run to transition. I actually had a really great swim time despite feeling like crap the entire time.

The bike course is alittle over 11 miles and an out and back loop. The first half is pretty much a small grade up then a hill at the end to the turn around cone and then back down to transition. As soon as I got on my bike, I knew that it wasn’t going to be a great ride. My legs felt like lead and just didn’t want to turn over. Also, my nose was starting to run again. I was passing a lot of men from the early wave and passed one woman who managed to get out of T1 before me. Throughout the entire ride I was only passed by one woman (Joanne Brown, another super fast TriMoxie athlete!)! Some men from the 3rd wave passed me once I turned around with their fancy race wheels. After the turn around you descend the hill so I got into areo and geared down to push my speed. I ended up gearing out (the down fall of having a compact crank) and just coasted down the hill. All the sudden I see something fly into my frame and clunk. My first thought was “oh shit!” I feathered the brakes slightly to make sure my bike wasn’t slowly disintegrating on me. Bike was fine so I got back into aero and went on my way. I looked down at my Garmin to check my speed and it read zero. ZERO! Yup, that little rock that I thought hit my frame was really my speed magnet flying off of my rear wheel. It took awhile for the satellite in my Garmin to read speed. I was definitely pissed that I lost my magnet, but in the whole realm of things, speed means nothing. It’s all about the watts, baby. At one point snot from my nose was rolling down my face (I know you totally wanted a mental picture of that…) so I got up out of aero to wipe my snot. Just as I was doing this I passed the course photographer! Sweet, that’s going to be a great picture. I quickly got back in aero and hoped they got one of me not wiping to huge booger from my face! I’ve been putting off writing this report until the race director posted pictures so I could include that hott picture of me! The ride finished uneventfully. I was not super happy with my bike time. It was slow. I am capable of being much faster. I just wasn’t with it on race day. Most likely a combination of the cold and mentally not in the zone.

Oh, the run…. where to start on this! I was really excited about the run. Earlier in the week I had done a 2.5 mile transition run at an 8:00/mile pace, which is fast for me. However, the run course was not fast. The website said it would be a 3 mile trail run. It would also go around a field at one point. When they said trail run I was expecting gravel/dirt trails and running around a soccer field. I was very pleasantly surprised with what I found on the run course. The first half mile or so was on pavement, up a big stinking hill and then into the nature preserve and onto the trails. The trails were wide grassy trails that looked like a bushhog went through the woods to make. The grass was not nice soccer field grass, but wild hay-like grass. The footing was uneven with small ditches, holes, roots, etc. It was bad. I’m not a trail runner so it was bad. The worst part…. it went up. Like continuously up for a good two thirds of the run. I don’t pick my feet up high when I run. I have the marathon shuffle so I struggled on the run. There were many points that I was forced to walk because I was a) out of breathe (darn cold!) or b) tripping all over the place! Surprisingly I wasn’t passed by a ton of people. Those who did pass me were in relays. Darn them and their fresh legs! Finally I came out of the woods and run around the hay pasture field and out back onto the road. Down the big hill and back to the park. I looked down at my Garmin and it already hit 3.1 miles and I wasn’t even back yet! What the heck! They said only 3 miles! 0.4 miles later I was done! I was not happy with my time at all! I thought it was just me who had a really shitty run. I talked to Angela after the race and she said everyone was super slow! She later emailed me later to let me know that the race director google mapped the run at 3 miles, but later when he ran it, it was actually 3.4 miles. All the pace times on the official results are wrong. I really didn’t run a 11:30/mile. It was more like a 10:00/mile. Still super slow for me lately!

Overall, I had a good race, but not a great race. I won my age group and finished 12th female. I was really hoping to crack Top 10 women that day. I think if I didn’t have such a shitty run then I definitely could have. But such as life. Mentally I wasn’t all in the race either so I didn’t push myself as much as I should have during the run. I did enough to win my AG, but I should have pushed more.

It was a fun little race. I was surprised to see quite a few fast and strong triathletes there and also a ton of first timers. The race is well put on and the location is very family friendly. I just hope they change the run course though. It was not pleasant!

I’ll add pictures from the race when they are finally posted to the website.