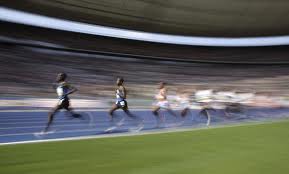 A good friend recently turned me about the The Science of Sport blog and, of course, being the science dork I am, really enjoy it. On Tuesday they (Dr. Ross Tucker and Dr. Jonathan Dugas) discussed the polarization of the debate on whether elite athletes are born or trained. I was intrigued by the discussion because a) I’m an athlete, b) I am interested in exercise physiology, and c) I have a background in genetics and molecular biology. Since the article peaked my interested I decided to do some research into the debate.

So… are elite athletes (or even top age group athletes) born or trained?

Sports performance results from a combination of numerous factors which interact with each other in a complex and poorly understood manner to mold a talented athlete into a champion. Within the field of sports science it is believed that elite performance is the result of both training and genetic factors. To what extend each component plays is the question that many sports scientists have tried to answer.

The “born versus bred” debate dates back to the 1800s, but more recently has been played out in the popular literature. In 1869, Sir Francis Galton proposed in his Galtonian Model that “practice and training would lead to improvements in performance, but that a ceiling existed for each person, influenced by heritable characteristics” (1). However, K. Anders Ericsson and his Colleagues have suggested that performance is constrained by engagement in deliberate practice and training during optimal periods of development (1). According to Ericsson’s model “practice is both necessary and sufficient for the attainment of deliberate performance, and is effective because it ‘selectively activates dormant genes that are contained within all healthy indovoduals’ DNA'” (1). A lot of people are familiar with Ericsson’s work because it is often referred to as the 10,000 hour rule.

Ericsson’s model proposes that “a specific volume of 10,000 hours of training must be accumulated over a period of approximately 10 years of structured training and involvement in an activity in order to achieve expert level” (1). His theory originated from a study conducted on violinists in Berlin. He found that the subjectively judged skill level of violinists were associated with accumulated training time over the first 20 years of their lives. The best performers had accumulated over 10,000 hours of training by the age of 20. Those who were judged to be good or average had accumulated about 7800 and 4600 hours, respectively. Ericsson concluded there was a ” complete correspondence between the skill level of the group and their average accumulation of practice time alone with the violin” (1). However, one crucial mistake Ericsson made was presenting no measures of variance in the results of the study. No standard deviations (SD) or ranges were provided and thus it is unclear whether the association between training and performance abilities applies to every individual in the study.

A similar study was conducted in chess players. Gobet and Campitelli found in a study of 104 chess players, that the accumulated training time to reach master level was 11,053 hours (+/- 5538 hours). This result is in close agreement with the violin study, but the study shows that there is enormous differences that exist between individuals that is indicated by the SD. Studies of sport have shown that elite athletes rarely accumulate 10,000 hours before reaching elite status. For example, one study found that 28% of elite Australian athletes reached elite status within 4 years of taking up the sport for the first time (1). It has been concluded that talent transfer based on innate abilities and ability and fitness developed through other sports, can be used to accelerate the process of becoming an elite athlete within a short time frame, which explains why elite athletes often perform far less than 10,000 hours of deliberate practice.

The Genetic Influence – Thanks Mom and Dad

DNA is the building block of all life forms (unless you’re an RNA virus). DNA carries the genetic information for all development and functions in organisms. At the molecular level, numerous physiological and biochemical systems and pathways must interact and function optimally to enable elite performance. These processes occur simultaneously within the musculoskeletal, cardiovasular, central nervous and respiratory systems. When considered on their own, each biological system is complex, consisting of different cell types, proteins, and numerous other macromolecules. Multiple types of genes throughout the entire human genome determine the genetic blueprint for each individual biological system. With the great complexity in the human body, it is highly unlikely that a singular or even a few specific genes are associated with elite athletic performance.

Elite performance is a polygenic trait, meaning that it is determined by multiple genes. There are numerous specific genes that studies have found to affect athletic performance to a certain extent. There are several genes that play a role in determining four intrinsic traits that are known to contribute to elite performance phenotypes – sex, height, skeletal muscle properties and VO2max. Biological sex is a key predictor of absolute levels of performance. An analysis of world record performances on the track and in road running events, ranging from 100 meters to ultramarathons, shows that the best males out perform the best females between 9% and 14% (1). Unlike sex, height is determined by both genetic and environmental factors (i.e. nutrition). Many studies have indicated that height is highly heritable with 80% of its variance controlled by multiple genes (1). The influence of height on sports performance is dependent upon sport (i.e. being tall is advantageous for basketball, whereas it would be deleterious for endurance running).

VO2max is a very interesting intrinsic factor because it is about 50% hereditary and 50% trained. VO2max is the maximum capacity of an individual’s body to transport and use oxygen during incremental exercise, which reflects the overall physical fitness of the individual. Large cross-sectional studies (i.e. the Heritage studies, the Dose Response to Exercise in Women (DREW) study, and SSTRIDE studies) have found an average training-induced improvement in VO2 max of 15.2 (+/- 9.7%), but the interindividual differences are significant (1). For example, based upon the studies, approximately one in seven individuals (14%) improved VO2max by less than 200 ml/min (less than 8% improvement from baseline). In comparison, 8% of the study population improved by more than 700 ml/min, which is a 28% improvement from baseline (1). Both genetic and environmental factors have been reported to determine VO2max in the untrained state and in response to training. The Heritage study showed that the variance of VO2max among families is 2.7 times higher than the VO2max variance calculated within each family (2). The correlation between parents and offspring indicated a 52% inheritance component (2). Genomic scans have found that 21 SNPs (single nucleotide polymorphism) are linked to 49% of trainability in VO2max (1). Individuals who carried nine or fewer of the 21 SNPs were found to have improved their VO2max by less than 221 ml/min, whereas those who carried 19 or more of the SNPs had improved by an average of 604 ml/min (1).

By the end of 2005, 165 autosomal (not a sex chromosome) genes and five genes on the X chromosome have been identified as having an association or linkage to performance. Seventeen mitochondrial genes have also been identified. Mitochondrial genes originate from DNA located in the mitochrondria of cells. Mitochondrial genes are solely inherited from the mother because the mitochrondria in the sperm cell is normally destroyed by the egg cell during fertilization. Studies have indicated that there is a significant association for VO2max between children and their mothers, but not between children and their fathers (2). Individuals with mutations in mitochrondria DNA generally show exercise intolerance, muscle weakness, and increased production of lactic acid (2).

One of the most studied genetic markers in the human performance field is an insertion/deletion (I/D)mutation in the gene encoding for angiotensin-converting enzyme (ACE) on chromosome 17 (2). ACE influences circulatory homeostasis (ability to stay the same) through the breakdown of vasodilator (widening of blood vessels) bradykinin and creation of the vasopressor, angiotensin II (a peptide hormone that causes vasoconstriction which results in an increase of blood pressure) (2). The I allele has been associated with fatigue resistance in skeletal muscles and with endurance performance. Studies have found that the I allele is found at excess frequencies among elite long-distance runners, rowers, and mountaineers able to climb peaks higher than 7000 meters without supplemental oxygen (2). The D allele has been associated with sprinting and power-based performance (2). Another study found that the I/D alleles are also related with type and the efficiency of skeletal muscle fibers (2). There is an associated between the ACE*II genotype and an increased percentage of type I skeletal muscle fibers (slow-twitch fibers) compared with the DD genotype (2).

No person has been able to ascertain the exact relative contribution genetics or training to elite human performance in sports, and it is generally recognized that both play a role in determining the elite potential in an individual. It is silly to negate the role genetics play in the development of elite performance in athletics. Our genetic codes determine the development and function of every molecule in our bodies. Scientific data on other determinants of elite performance, such as metabolic efficiency, fuel-oxidation rates, muscle-fiber contractility, and even motivation for exercise is currently limited, but it seems reasonable to suggest that the above determinants will also be influenced by genetics. However, science and common sense has also indicated that training plays a major role in elite performance. Tucker and Collins propose a model where training is defined as the realization of genetic potential (1).

Personally, I agree with Tucker and Collins. Training maximizes the likelihood of obtaining a specific performance level with a genetically controlled “ceiling.” For example, you might be a standout basketball player on your high school team, but if you’re only 5’4″ then your chances of playing in the NBA are probably very slim. You can train all you want to improve your skills and fitness, but you cannot change your genetics to grow taller. In 2003, the Human Genome was successfully sequenced. Scientists across the globe are now just starting to identify the function and role each of the approximately 23,000 genes in the human genome. Determining the function and role of genes in the human body is extremely complex and will likely take decades to complete and fully understand. The role of genetics in human performance exists and will not likely be disputed as is the role of training. How much each plays in determining the performance level of an individual is really the question scientists are trying to answer. The question of determining whether elite athletes are born or trained is really the old “nature vs. nurture” question in disguise. Only time will tell.