This post is the third of a multipart series on the Core. If you missed Part one and Part two then make sure you check them out HERE and HERE.

Have you ever worked with a personal trainer before? How about being treated by a physical therapist or chiropractor for an injury? Chances are (if you worked with a good and credentialed professional) that you underwent a functional movement screening.

As athletes and fitness-enthusiasts we are constantly working harder to become stronger and healthier in our respective sports and life. We often spend countless hours working to improve in our activities by increasing our flexibility, strength, endurance, and power. However, a majority of athletes and individuals are performing high-level activities with inefficiencies in their fundamental movement patterns without even knowing it. In today’s ever-evolving training and conditioning market, athletes and individuals begin to specialized in a particular sport and/or activity early in life, which as a result, often creates muscle imbalances and weaknesses in the kinetic chain. A majority of athletes and individuals, including myself, will continue to train through injuries, which again can lead to muscle imbalances and poor movement patterns. When an athlete or individual becomes fatigued during activity they tend to lose form and their body will default to what it knows as its “normal” movement pattern, which often has weaknesses and imbalances and can lead to potential injury. Have you ever seen a marathon runner at mile 22? Chances are his running form has greatly deteriorated over the course since mile 1.

According to Gray Cook, founder of the Functional Movement Screen, the intended purpose of the movement screen is to:

I highly suggest working with a trained professional because they are trained to see muscle imbalances and deficiencies in movement patterns and can develop a corrective exercise plan to “fix” any problems to make you a stronger and healthier athlete. However, you can give yourself a quick and dirty functional movement screen. I suggest grabbing a friend and/or mirror to do this.

The best way to evaluate your movement pattern is through the overhand squat assessment. The squat movement pattern is part of many functional movements. The squat, especially an overhead squat, requires coordinated extremity mobility and core stability with both the hips and shoulders functioning in symmetrical positions. Through a squat, one can find any mobility and stability issues in the ankles, knees, hips, and shoulder regions.

How to Conduct Your Own Functional Movement Screen:

1. Stand in front of a large mirror, preferably with a friend and/or coach to view your movement patterns. Or have someone videotape or take pictures of your movement. It’s best if you do this barefoot too!

2. Place hands above your head in an overhead position. You can hold something such as a PVC pipe or broom. Nothing heavy.

3. Begin squat movement pattern. Do at least 10-12 reps. Continue to do more at different angles as needed (i.e. front, back, and side). 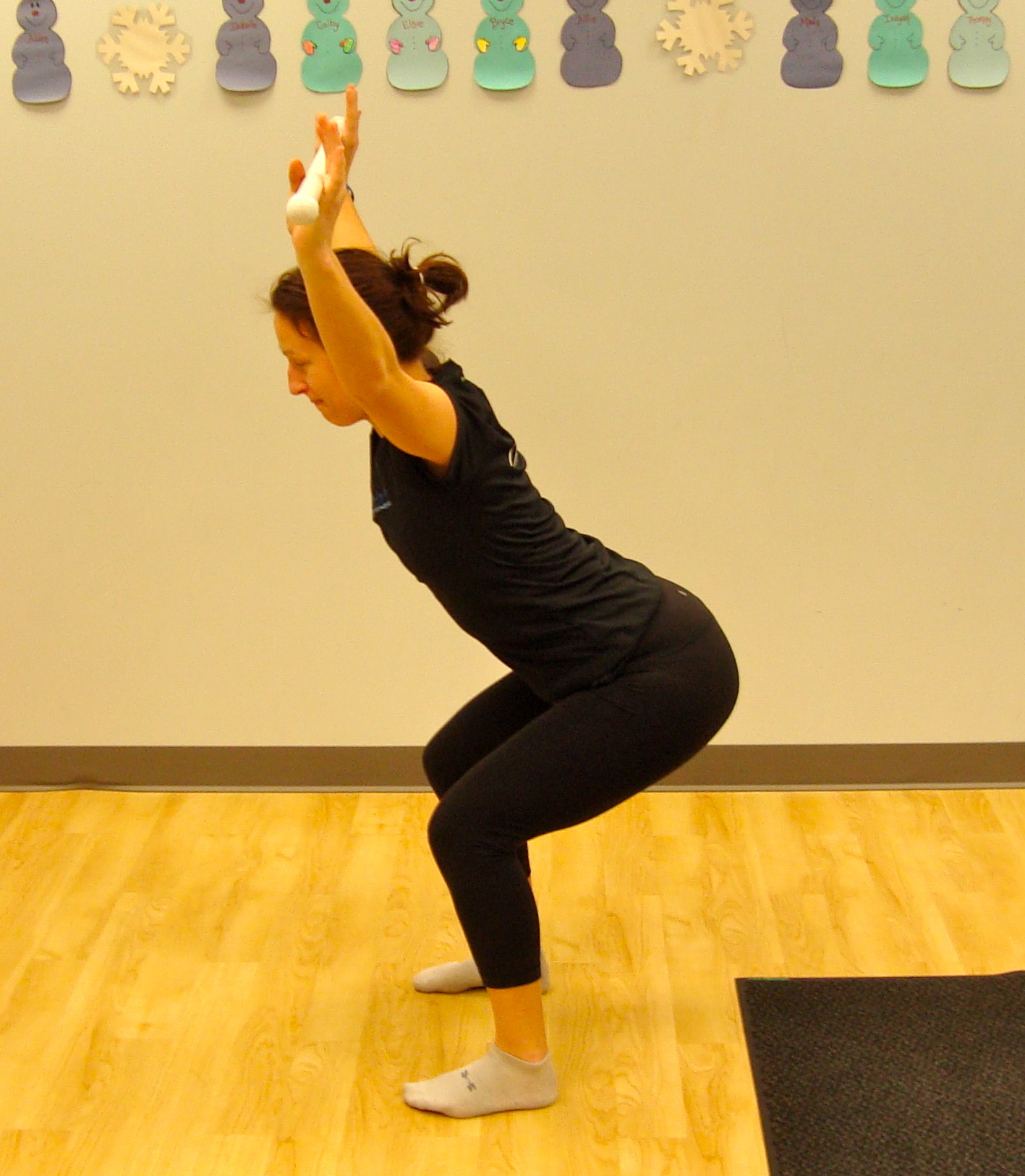 Side view – If you have a trained eye then you can see that I have an anterior pelvic tilt (more on that later)! 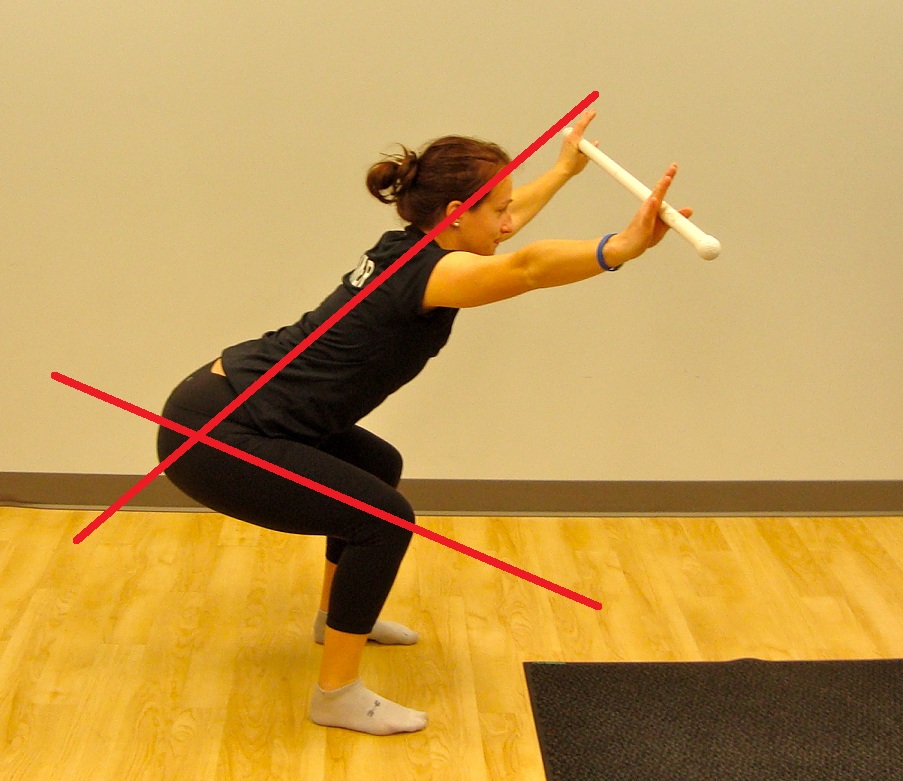 From the lateral (side view) you can see many major issues in the hip, lower back, and shoulder/upper back region. One of the most common movement compensations is excessive foward lean. The above picture shows an example of an excessive forward lean and also arms falling forward. Most people who lean excessively forward in the overhead squat assessment have tight calf muscles (Soleus and Gastrocnemius), Hip flexor Complex (Psoas muscles), Piriformis, and Abdominal Complex muscles. Muscles that are very weak, and often inactive in a majority of the population, are the Gluteus Maximus and Hamstrings. Muscles that are commonly tight for people whose arms fall forward are the Latissimus Dorsi, the Pecs, and Teres Major. Underactive and weak muscles are generally the mid/lower Trapezius, Rotator Cuff muscles, the Rhomboids, and Posterior Deltoid. 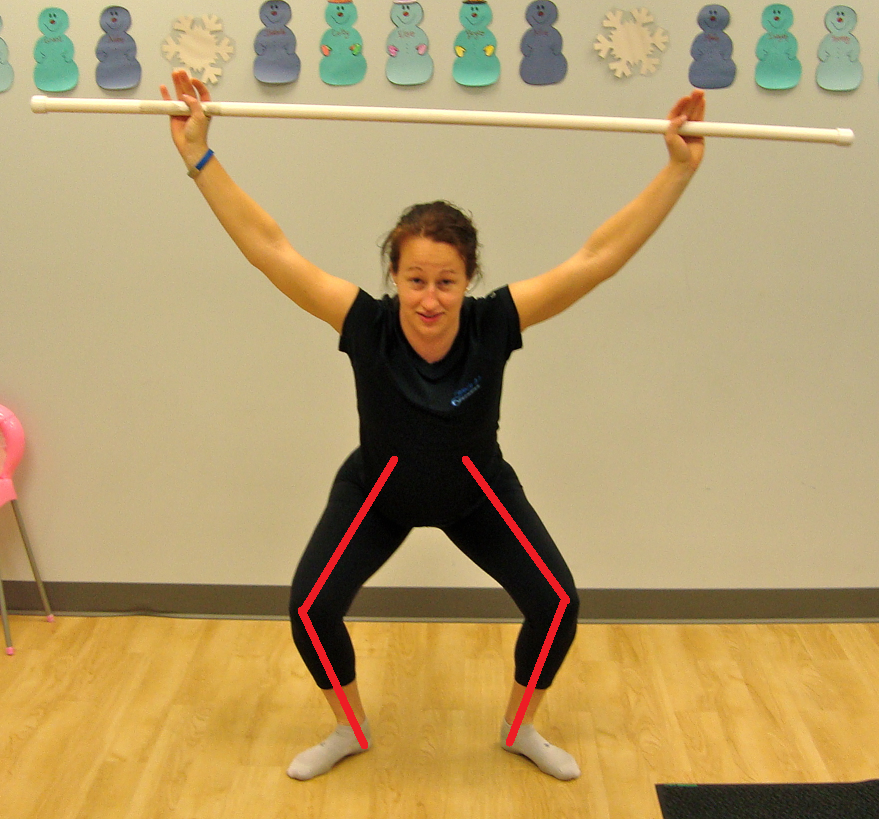 One of the most common movement compensations that occur in the overhead squat assessment include compensations in the knees and feet. In the above picture two compensations are occurring: the knees are moving out and the feet are also turning out excessively. When the knees move outwards during the lower portion of the squat movement, the probable tight muscles are the Piriformis, Biceps Femoris (one of the Hamstring muscles), and the Tensor Fascia Latae/Gluteus Minimus. The probably weak and inactive muscles are the Adductors and Gluteus Maximus. A majority of people have a slight toed out position, but if the feet turn out too much then muscle imbalances most likely exist. The major contributor to the feet turned out position are the lateral (outer) calf muscles and the Biceps Femoris. Probable weak muscles are the medial (inner) calf muscles and hamstrings along with the Gluteus muscles. 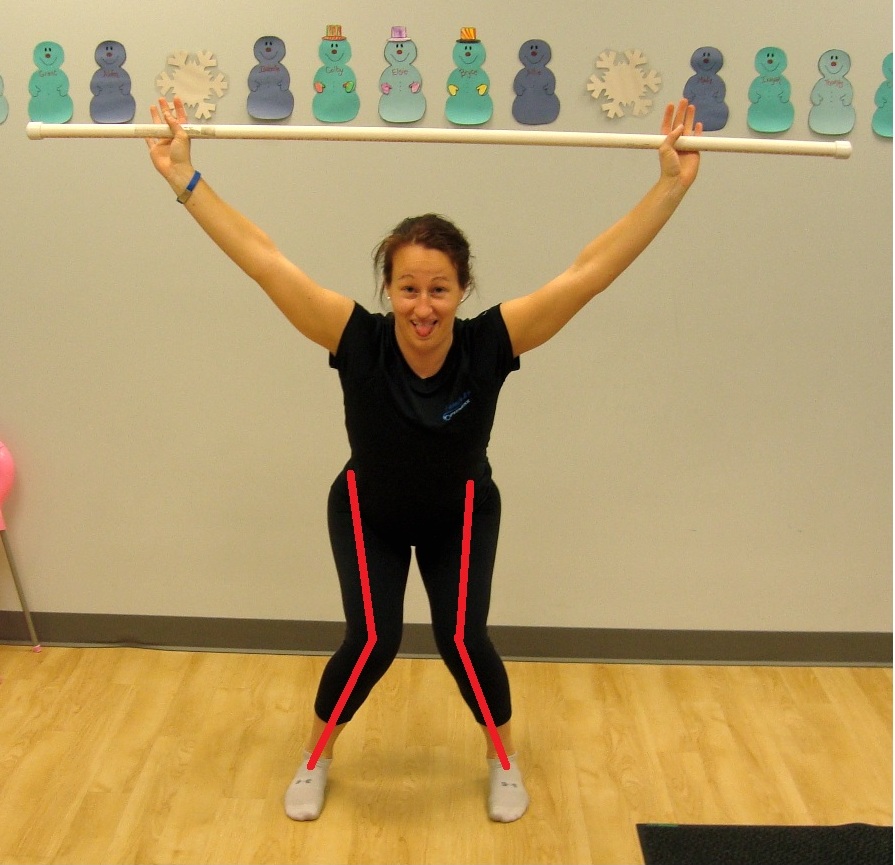 Knees moving inwards is also known as knee valgus clinically. Knee valgus is fairly common, especially in young women in their growth and development stages. The reason for knee valgus is not fully understood. The most common theory is that weak gluteal activity allows for a greater degree of hip internal rotation and tibial rotation. One recent study has proposed that increased ankle stiffness leads to restricted dorsiflexion range of motion. They suggest that this leads to foot pronation and internal tibial rotation that ultimately leads to knee valgus. Either way, it’s not a good thing since knee valgus can increased chances of an ACL injury. Probable overactive muscles in someone displaying knee valgus are the adductor complex, Biceps Femoris, Tensor Fascia Latea (TFL) and lateral Gastrocnemius. Probable underactive muscles are the medial hamstrings and Gastrocnemius, the Gluteus Medius and Maximus, and the Anterior and Posterior Tibialis.

So now that you know what key dysfunctional movement patterns to look for (of course there are way more that are possible), you need to know how to “fix” them! We’ll discuss that in future blog posts so stay tuned!

One thought on “Part III: The Core – A Case for a Functional Movement Screen”