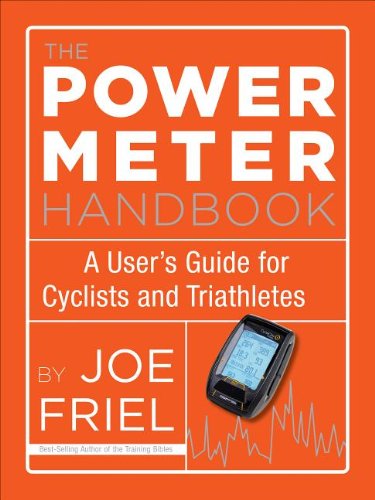 So I like to read if you haven’t figured that out. Especially about triathlon and exercise physiology related things. Yes, I am a total geek and I will own it! 🙂

Last April I decided to spend a lot of money to buy this little thing called a powermeter for my bike. Best investment ever! So in an effort to better understand what my powermeter tells me when I upload data to TrainingPeaks, I decided to invest in a couple of books. My first purchase was Hunter Allen and Andrew Coggan’s Training and Racing with a Powermeter. I excitedly told my coach about my purchase and she suggested that I read Joe Friel’s The Powermeter Handbook because it is easier to read and geared slightly more towards the triathlete. I have yet to read Allen and Coggan’s book, but it is in my ever increase stack of books to read. I’m current reading Joe Friel and Jim Vance’s Triathlon Science book. It was just released a couple of weeks ago and I am already over half way through it. Definitely a worth while investment if you’re a coach and/or serious athlete. And perhaps a total trigeek like myself! 🙂

One of my favorite quotes thus far in Triathlon Science is from Hunter Allen’s chapter on Triathlon Training Technologies. According to him “the powermeter does not lie, so workouts can be mentally challenging when fitness is not high as desired. Triathletes tend to be critical of themselves, so having a ‘truth meter’ on the bike might not be the best idea for hyper-self-critical triathletes“ (page 150). So fucking true. My powermeter is certainly my “truth meter.” I whined over and over again last year to my coach (and really anyone who would listen) about how crappy a cyclist I truly am. I always thought that I was a strong cyclist and easily finished in the top percentage of my age group, but through riding with a powermeter I learned that I completely suck at actually riding a bicycle. I was a gear-masher. My cadence was way too low. And I just plain sucked at riding consistently. We’ll talk about this at another time. Let’s get to the book review!

I’ve always been a huge fan of Friel. I like his writing style. It’s easy to follow and he explains things well. The book is divided into three parts: (1) what is a powermeter and how can it help me?, (2) how can I train more effectively using my power meter?, and (3) how can I use my power meter to improve my competitive performance?.

The first section was good. It discussed how a powermeter works. Exactly what I needed. So what is a powermeter and what does it do? Well, lets first answer why power. Training based on heart rate and intensity or rate of perceived exertion (RPE) is fine, but power on the bike is really the top dog. Most athletes believe that heart rate is proactive, but in fact it is reactive. It responds to what the muscles are doing. As Friel says, it is not the “engine”, but is simply the “fuel pump.” Friel points out that muscle is where nearly all the fitness changes take place and focusing on the rate at which the blood is pumped to the muscles is not the most effective way to train. Heart rate can also vary on a day-to-day-basis because of outside forces such as diet, race-day excitement, and psychological stress. Heart rate is also delayed meaning that if you are doing intervals then your heart rate will lag slightly behind the intensity pick up. Certainly heart rate is good to train with if that’s all you have. Speed is not the best way to gauge your fitness because obviously it varies on a multitude of factors, namely wind and hills. Feel or RPE is another method of training. Some people just prefer training by feel. It works for some, but for a majority of us, we prefer numbers. Most of us train by a combination of the above indicators.

So what is power? Friel defines power as “how much work you are doing and how fast you are doing it.” To physicists power is equal to work divided by time. However, in cycling terms we can define power as “power equals force times velocity.” We can break it down to “force is what you put into the pedals and velocity is how fast you are turning the pedals” (page 24). So power essentially tells you how much work you are doing at any given moment. As I mentioned above, powermeters are “truth meters.” A powermeter works by detecting force and cadence. Most powermeters have a magnet that is placed on a crank arm and a magnetic sensor on the frame or some combination of the above. Cadence is measured by how long it takes for the cranks to make one full revolution. Some do it electronically by measuring sine wave. Yeah, don’t ask me how. I only got a C+ in calculus. To calculate force, a powermeter has this thing called a “strain gauge” and is the most expensive part of the powermeter. According to Friel, “a strain gauge is a thin, flexible strip of material with a metallic foil pattern inlaid on it. As force (torque) is increased on the pedal, the strain gauge is very slightly stretched, thus changing the shape of the metallic foil pattern. When the pattern deforms, its electrical resistance changes. The amount of this change is an indication of how much force (torque) is being applied” (page 26). Okay Friel, I’ll take your word for it since physics is not my thang.

Friel then goes into describing the different training zones, etc. But, what really interested me was his section on economy. Economy is HUGE in Ironman training and racing and thus it peaked my interest because it’s relevant to my goals this year. Economy is a huge determiner of performance in Ironman racing. An Ironman is generally raced at about 70% of anaerobic threshold (AT), possibly less for triathletes new to the distance (as in Moi!). Obviously, 112 miles on the bike requires a constant pace and effort. Burning matches is an extremely bad thing and can lead to a horrible run and a possible DNF. A powermeter can reign in an athlete from doing stupid things.

Part two of the book gets more into the nitty-gritty stuff of the powermeter and training with one. The first chapter of this section is on power zones and how to determine your functional threshold power (FTP), which happens to be one of my favorite things to do. NOT! Power zones are very similar to heart rate zones: active recovery (zone 1), aerobic endurance (zone 2), tempo (zone 3), lactate threshold (zone 4), VO2 max (zone 5), anaerobic capacity (zone 6), and sprint power (zone 7). The primary difference between heart rate zones and power zones is that power zones are a percentage of the FTP instead of the percentage of maximal heart rate.

Friel tells you how to determine your FTP. Once you have calculated this then he tells you how to ride with intensity. The biggest thing that I learned about in this chapter was the variability index (VI). I knew a little bit about it via my coach who yells at me about my piss-poor VI. VI is the comparison of your normalized power and average power. What is normalized power? According to Friel it is the “average power normalized to reflect the metabolic cost or sensations of fatigue experience during a ride” (page 79). In other words, NP compares the range of variability of power during a ride with the average power of the ride. So if you ride inconsistently then your normal power will reflect this. It is actually telling you what the workout felt like. A perfect VI is 1.0, meaning that you rode very consistently at the same average power. If you a bad cyclist like me then your average VI for rides tends to be in th 1.15-1.25 range. I get a big fat F for my VI. My horrible VI tells me that I ride inconsistently and I often burn too many matches. My workouts feel a lot harder than they actually should be. This is very bad for Ironman racing. My big goal this is year is to learn to ride my bicycle better and work on having a “perfect” VI.

The most interesting thing I found in this book is Friel’s 50-40-30-20-10 Rule. The concept actually came from Alan Couzens, an exercise physiologist and triathlon coach. The essence of the rule is to conserve energy when the bike is going fast (i.e. downhills; think descend into Keene on IMLP bike course!) and expend energy when the bike is going slow (i.e. uphill; climbing the Three Bears). Friel then goes on to talk about this theory on burning matches. I highly suggest you pick up the book for these two tidbits. Burning too many matches = bad bad bad!

The remaining part of the book discusses how to design workouts using power zones and Friel gives examples of workouts for the triathlete at various distances and the cyclist for various sorts of races. Again, I suggest picking up the book if your interested in this portion of the book. Overall, I do believe it is a worthwhile investment if you have a powermeter. I certainly learned a lot about my powermeter and how it works. Friel doesn’t get super technical like I guess the Allen and Coggan’s book does; however, I think it’s great for someone like me who isn’t really a fan of calculus and physics. I still am looking forward to the Allen and Coggan book though. Friel’s book definitely answered a majority of my questions and also made me understand and connect the dots of why my coach assigns certain workouts for me. I’m very much a “why person” so I like to know the why behind everything. Yes, I was totally that kid who would constantly ask why. 🙂

Verdict: Buy the book if you have a powermeter!