Yup, you read that title correctly.

On Sunday I had a 3 hour ride and the weather was beautiful! I was psyched to get out on my bike. I decided to head out towards the Baldwin/Sebago area to hit up some rolling hills. The first hour of the ride was intended to be my warm-up/endurance zone, followed by 2 x 20 at half-Ironman zone, and then wrapping up with an 1:10 of zone 2 endurance riding all the way back home.

My goal of the ride was to improve my power VI and make it “perfect” so my coach can give me an “A.” If you don’t know what that means, then go buy a powermeter! 🙂 In layman term’s I need to learn to ride at a steady pace throughout the entire ride – keeping power low as possible while climbing and pushing the watts on the downhills. I’m getting there, but I still have a lot of work to do. However, my cadence is improving rapidly. I’m a former gear masher and over the course of the past year or so I have been working hard to spin instead of push weight. The ideal cadence for a triathlete is between 80 and 100 rpm, with the “golden number” around 90 rpms. Spinning the legs versus mashing gears will save your legs for the run.

The first hour went by quickly. I wasn’t sure at first on what to wear. It was sunny and it the 60s. I settled on wearing cycling capris, a long sleeve cycling jersey and a thermal shirt underneath. I brought gloves with me in case I needed them, but I didn’t. Yay, Spring! I had to stop every 45 minutes to 1 hour to stretch out my hip. With all the climbing my psoas (especially the right side) were cramping up. Luckily my bum knee held up just fine (at least for the bike portion). I rode out Route 113 for 1.5 hours and then turned around and headed back towards home. Later this spring/summer when my mileage increases I plan to ride up 113 to Fryeburg and back. Possibly all the way to the New Hampshire border and back. That should be a good 100+ mile ride. 🙂 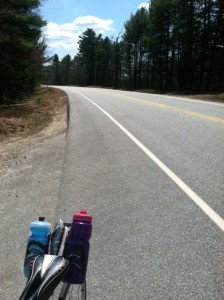 Shortly before the incident…

Anyway, at the 1:30 mark I turned around. And it happened shortly after that. I hit a slight downgrade and started to push the power downhill. I was cruising at about 30 mph minding my own business (and apparently with my mouth open) when a giant bug flew into my mouth. Actually, I think it skipped my mouth and went right to the throat. Obviously it caught me completely off guard. It happened almost instantaneously too. I have a major gag reflex and a swallowing a giant bug will trigger it. I puked up the gel and Ironman Perform that I had just consumed about 10 minutes before all over the cockpit of my bike and all over myself. Great! I’m sure that all the cars that drove by me got an awesome sight. I bet they all want to be triathletes now too. Not only do we piss on our bikes, but we puke on them too! Yay! And this is pretty much how it went down…

But, seriously. Worst experience ever on the bike. Lesson learned – keep mouth shut while riding to avoid ingesting large insects. I cleaned my bike up from the gooey, sugary mess and attempted to wipe myself off and then started pedaling again. My tummy was still doing flip-flops for a while afterwards, but other than that I felt fine. During the last hour of the ride the wind picked up a bit since I started heading towards the lake. Other than that it was a rather dull last hour home.

My transition run on the other hand was not a good run. I managed to run 15 of the 20 minutes before my knee really started to hurt. I decided to play it safe and walk the remaining 5 minutes. Let’s hope this knee gets better soon! PolarBear on Saturday! Eekk!

~ Happy Training folks (and remember to not eat bugs on your rides)!