For the past few weeks I have been enjoying my mini “off-season.” I’ve pretty much done what I wanted when I wanted. However, with the Fall running season approaching I have been slowly building my miles and creating a semblance of a half-marathon training plan. But, more on that later this week.

Wednesday night I got to run with my summer running buddy for the last time before he heads back to London for work. Insert sad face. Wednesday was also like 90 degrees and humid as heck. That seems to be the pattern for our running dates. Last time we ran together it was about 105 with the heat index out at OOB. Apparently Burger secretly cursed me throughout that run. Ha! Wednesday night there was even an ozone alert for the coastal region, but with the pleasant sea breeze I didn’t believe there was an issue.

We began our run on the Eastern Trail and then ran over to the Boulevard. We were moving at a decent pace for the first two miles chatting it up and whatnot. Finally around the 2.5 mile mark I had enough and had to walk. I was having a hard time breathing. I guess there really was some ozone heaviness going on. We walked for a while so I could catch my breath. Then Burger suggested we go run hill repeats. I didn’t really want to because I was in no shape to do so, but because of my competitiveness and my unwillingness to be shown up by a guy I agreed. It’s funny how my pupil turned into the coach.

We jogged over the 295 overpass and up towards Washington Ave. to the grassy East End hill. And by hill I meet a mountain… I suggested Cutter Street, but Burger prefers a grassy or gravel path. He’s got some IT-band issues too. Two broken peas in a pod…

Burger led the way and I followed. Holy heck did my heart feel like it was going to burst out of my chest! The hill itself is really split into two halves. The first half is not a bad grade, then it flattens out for about 5 feet and then turns vertical for another 100+ feet, which was the worst part. Burger ran up rather effortlessly, but I struggled not to puke. Of course, he has the advantage of long legs for the last part of the hill. I averaged about 28 seconds for the first repeat.

We stopped at the top to rest for a minute or so. I concentrated on not heaving my lunch all over the place and catching my breath. After realizing my lungs weren’t going to bust out of my chest, we jogged back down for another repeat. 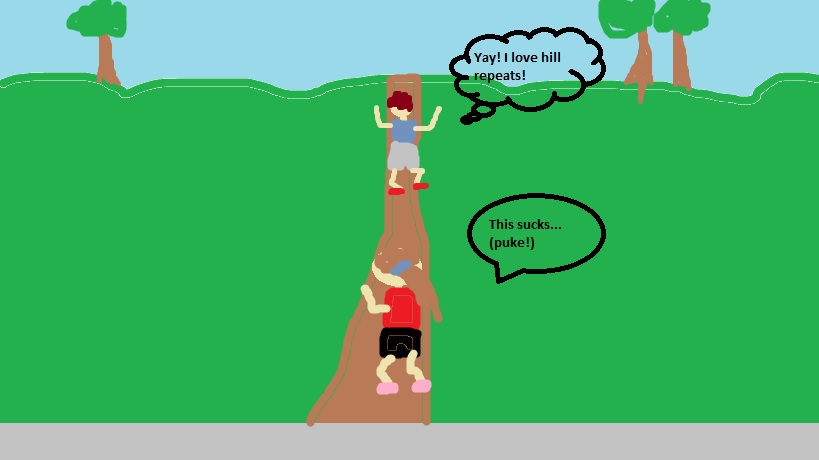 My second and third repeats were a few seconds slower than the first. My quads and glutes were starting to burn from working hard to muscle my little legs up the vertical footage. The fourth one was tough, but I managed to finish stronger and faster than the second and third repeats. After cresting the hill for the last time I promptly fell down into the grass. Boy did I feel like dying! Burger thought it was a great idea to do 5 repeats. I politely declined the fifth repeat and continued lying in the grass in a daze. 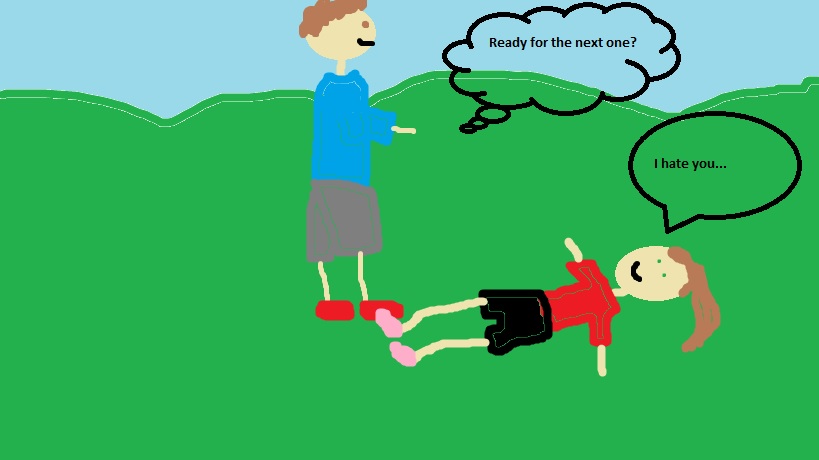 After Burger was done showing off we headed back towards the cars for the next adventure – hot yoga. I’ve been driving around with my yoga bag and mat for the past two weeks meaning to hit up a class, but never could muster up the ambition to actually attend a class. We headed to Greener Postures for an hour-long hot yoga class. My legs were definitely shaky during the class. My body really needed that class even though I wanted to die half way through the class. I was most impressed with the music selection for the class. At one point Dave Matthew’s Mercy Me came on during downward dog and I started to shake my tail feathers a bit. Sorry to the fellow yogis behind me that had to witness that!

I was definitely sore on Thursday morning when I woke up! I couldn’t even wear heels to my job interview because my calves were so sore. It felt good to do some speed/strength work in my running, but for now I’m going to go back to my zone 2 running to further build my endurance for some up coming half marathons this Fall.