Finally… a good running race! After my failed attempt at running a good, strong race at the Cape 10 miler I needed a good race. I haven’t run a stand alone 5k in about a year and a half so I was overdue for a running race and a PR. If I didn’t PR then I think I was going to hang up my running shoes and give up now.

My coach told me to aim for 8:40-8:50 for the first mile and then hold on and finish at or around that pace. The gun went off and we all started. I had to fight for some ground to get around some people and keep my pace. I looked down at my watch and saw 7:59 pace. Wow! I haven’t seen that number since the one-mile time trials that I use to do with my run group. It helps that the first mile was a downgrade, but I knew the “big” hill was coming sooner than later. I considered slowing down because I wasn’t 100% sure that I could hold the pace. However, I felt good so I said screw it and just went for it! I huffed and puffed up the hill on Fore St, which sucked, but I have done that hill sooo many times that I knew I could do it. Then it was down by the cannons and back up to the turn around at Turner St. I got passed by at least one 9 year old and 70 year old. Damn, they were fast! At this point I was running about a 8:20 pace. I had definitely over dressed for the race and started heating up. Off came the hat and the gloves. Down the hill and up India St to Middle and to the finish. I was huffing and puffing and kept telling myself I was almost there. I’ve been reading Iron Wars so I started channeling my inner Mark Allen and Dave Scott (and if you haven’t picked the book up yet, I highly suggest it!)! I could see the finish! My legs were starting to get tired, but I was almost there! A friend yelled to pumped my arms and get moving, so I did! I could see the time clock ticking… 25:45, 25:46, 25:47…. damn, I want a sub-26:00! I pumped my arms and crossed the line at 25:55! Wahoo! 🙂

And then I wanted to puke, but I didn’t! I had a great race and I’m super pumped about it! It’s amazing what can happen when you actually start training correctly! I haven’t done much speed work, but I have done a lot of endurance runs that have definitely made a difference in my running! Plus, it helps that I have actually done all my run workouts. I have a half marathon in about 6 weeks so I’m excited to see what happens at that race. I hope the hell that I PR at that race, since the only other Half Marathon I did was when I was really sick! 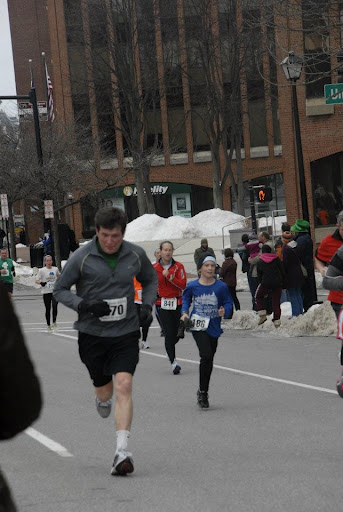 Here’s a lovely picture. I’m in the red (and yes, I got beat by the little 9-year old in blue)
Happy Training!