Gone with the Wind is my absolute favorite book. I first read it about two years ago. It was a book I never thought I would want to read, mostly because it’s about 1000 pages long. But, the past three years or so I have been trying to read a lot of the great classic works of literature. I went to an amazing private high school because in 8th grade I refused to go to my local public high school since I was not being challenged academically. My public high school only read about 4-5 books a year in their English classes. At my high school we averaged between 12-20 books a year in Honors English, most of which were from the classics list. I probably read about 80% of them. Most of the books were really good, others not so much. I can’t stand Jane Austen!
Gone with the Wind is an American classic. It is a romance novel written by Margaret Mitchell that takes place in Georgia during the Civil War and Reconstruction Period. The story follows the life of southern belle, Scarlett O’Hara, and her journey from loosing her father’s beloved plantation, Tara, during Sherman’s March to pinning for the wrong man all her life only to realize at the end her true love was right in front of her face the whole time.
I think the main reason I love Gone with the Wind so much is because I see myself in Scarlett. Scarlett is a dark-haired, green-eyed girl (like me) who exhibits her father’s hard-headedness personality (again, like me). Determination defines Scarlett and drives her to achieve everything she desires by any means necessary. She can be narcissistic and backstabbing to win the admiration of every young man in the county (which isn’t me), but later, when faced with the threat of starvation and death, she is determined to survive and does so by picking cotton, running her father’s plantation, forging a successful business, and even killing a man. I’ve never killed a man or run a plantation, but when faced with certain adversaries I become very determined to succeed. Throughout the novel, Scarlett changes from a spoiled teenager to a hard-working widow and a survivor.
So what does Scarlett O’Hara have to do with my life? Well, the past two weeks have been an emotional roller coaster for me. If you read my post from Tuesday, then you might have guessed that I’ve been doing a lot of reflecting on my life. Over the past two weeks I’ve dealt with a lot of stress and frustration from work, school, and my personal live. The only thing that has kept me sane has been my training. The weather in New England has been insanely nice, which has led to some awesome early season outdoor rides (Azul made her maiden voyage Friday night!) and runs. This past week has been a recovery week for me. It was perfect timing. My body was sore and my emotions were high. I haven’t been sleeping well because I can’t stop my brain from thinking and over-thinking every minute detail going on in my life. My coach suggested that I try melatonin, which has helped (but it makes me loopy and have weird dreams).
On Thursday I had a mind-blowing 4 mile run. I’ve always disliked running, but something happened on Thursday. I’m not sure if it was because of the gorgeous weather, the fact my chiropractor put my pelvis back in alignment the day before, or the stars magically aligned, but I fell in love with running. I averaged about an 8:30/mile pace for the first two miles and it felt like an easy 10:00/mile! Not only did my run physically feel easy and refreshing, but I was able to clear my mind and sort somethings out. Cue the Bob Marley….
“I can see clearing now, the rain is gone…”
Over the past two weeks I’ve felt like Scarlett. When it rains, it pours. Normally, I handle pressure and stress very well. But over time it does accumulate till I reach a breaking point. Yesterday was the 3 year anniversary of my mother’s death. I reached my breaking point today. But you know what? I needed that. Sometimes you just need to let things out and then you feel better. Over these past two weeks I’ve been acting like Scarlett… a little whiny, jealous, insecure bitch (excuse my language), but after today, I’m over it. I’m strong and determined. I can do anything I put my mind to and if someone does see how awesome I truly am, than perhaps they’re the stupid ones. And as Scarlett said,
“After all, tomorrow is another day…”

And, starting this week I promise to get back to more fun things, like training and nutrition! I have some pictures of my new bike coming! But, here’s a picture of Azul and I on our maiden voyage Friday night… 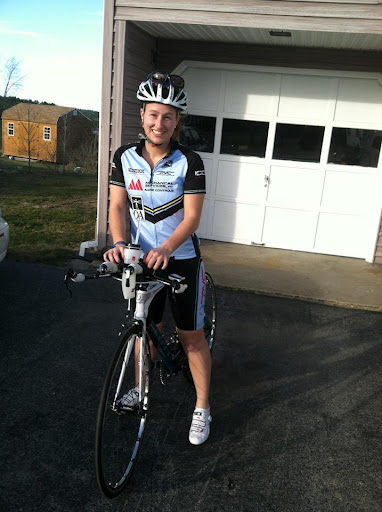