Yesterday I gave an overview of each of the macronutrients needed by the human body for survival. Today I will provide a more in-depth discussion of carbohydrates. I could spend days talking about carbohydrates because there are so many things to talk about, but today I just plan on discussing what exactly a carbohydrate is and what it does in the human body. In the future I plan to discuss other topics such as the glycemic index and how much carbohydrates you should include in your diet (although you should really consult with a registered dietitian to figure out what is best for your body and health).
Carbohydrates are groups of molecules that are comprised of carbon, hydrogen, and oxygen atoms. Carbohydrates are subdivided into three main categories: monosaccharides, oligosaccharides, and polysaccharides(1).
Monosaccharides (“mono” = one, “saccharide” = sugar) are the simplest carbohydrate molecules. These simple carbohydrates often have a sweet taste and are classified by the number of carbons that make up their physical structure(1). The three most important nutritional monosaccharides are glucose, fructose, and galactose. Glucose is the most common mechanism for transport of carbohydrates in the body and some people refer to glucose to as “the blood sugar”(1). Glucose is a naturally occurring sugar in many foods and also is the end product of the breakdown of more complex carbohydrates. Glucose can be easily broken down by the body and can be 1) used as a fuel substrate to supply energy to the body, 2) stored as muscle or liver glycogen, or 3) converted to triglycerides and stored for later use by the body(1).

Fructose is another simple carbohydrate. It is found in fruits, table sugar, honey, and high fructose corn syrup. Table sugar, corn syrup, and honey all contain glucose and fructose, but in differing amounts. During digestion, table sugar is broken down into 50% glucose and 50% fructose(2). High-fructose corn syrup (HFCS) digests into about 55% fructose and 45% glucose. Fructose has come under scrutiny in recent years because of the obesity epidemic in our country. HFCS is made using chemical processes that first convert cornstarch to corn syrup and then convert 42-55% of the glucose to fructose to make it taste sweeter(2). Some research has indicated that fructose is digested, absorbed, and metabolized differently than glucose in ways that favor fat production. The jury is still out on fructose; however, it’s best to avoid soda and other crap that contains HFCS.
When monosaccharides bond together, they can form more complex carbohydrates referred to as oligosaccharides. A majority of oligosaccharides are disaccharides, or double sugars. All disaccharides contain glucose and generally are represented by sucrose, lactose, and maltose(1). Sucrose is commonly called table sugar, beet sugar, or cane sugar. Sucrose contains one glucose and one fructose bonded together. Another common disaccharide is lactose, which is formed from the bonding of glucose and galactose. Lactose is commonly referred to as the “milk sugar” because it is only found in milk from lactating animals(1). Lactose can be a difficult disaccharide for some people to digest (like me!) and can result in excessive fluid and gas build up in the bowels, bloating and cramping(1). The third most common disaccharide is maltose, which is created by the bonding of two glucose molecules. Maltose is commonly called malt sugar and is produced when seeds sprout(1). The sprouting process of plants can be altered by heat in the process called malting and is the first step in the production of alcoholic beverages. 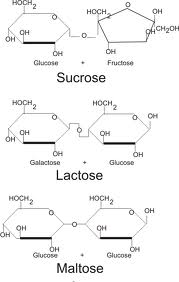 Polysaccharides are considered to be complex carbohydrate molecules. Generally, polysaccharides are linear or complex branching chains that are composed of more than 10 monosaccharides bonded together. The two most common plant polysaccharides are starch and fiber. Starch is the storage form of carbohydrates in plants and can be digested by humans. Fiber is considered a non-starch structural polysaccharide and may be the most abundant organic molecule on the plant, but it cannot be digested by humans. The primary animal polysaccharide is glycogen. Glycogen is either stored in the skeletal muscle or liver and is composed of subunits of glucose(1). One unique characteristic of glycogen is its branched structure. Generally, a glucose branch occurs on every 8-12th glucose subunit. This branching of glycogen is very important because it allows for very rapid breakdown of the glycogen molecule into its glucose subunits to be used for energy by the body.

As previously discussed last week, carbohydrates, mainly in the form of glucose, are used by the body as fuel. Glycolysis is the metabolic pathway that results in the breakdown of blood glucose to produce ATP. Glycogenolysis (which I did not discuss last week) is the process which glycogen stores are broken down to produce ATP. Glycogenolysis is essentially considered the same pathway basic pathway as glycolysis, but each differ in the entry point in which they enter into the metabolic pathway. Generally, because of each enters the pathway, glycogen yields three molecules of ATP compared to glucose metabolism of two ATP molecules(1).