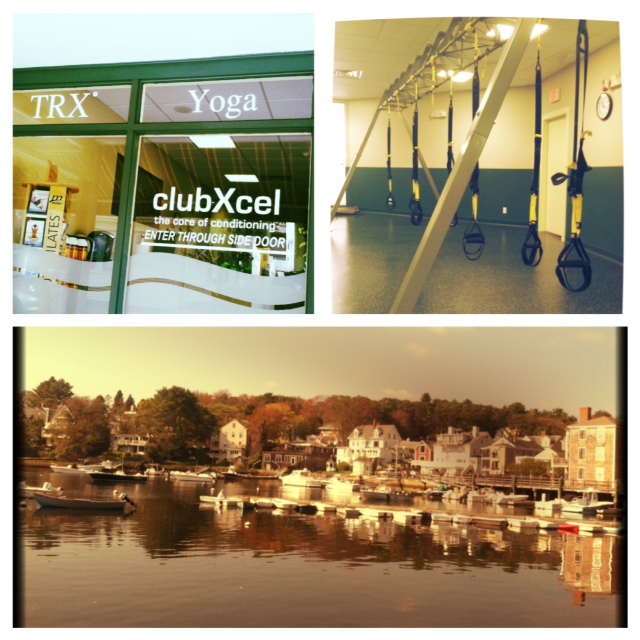 Yesterday I took a road trip down to Manchester-by-the-Sea in Mass. It is a beautiful seaside town outside of Boston. The town was quite lovely, but was a pain in the ass to get to. Well, perhaps it was a pain in the ass because my father’s GPS decided to have a couple of issues and redirected me in circles through Danvers and I also almost got side-swiped by some dumbass driver. Have I ever mentioned that I HATE driving in Mass?!

Anyway, I decided that now was a good time to do my TRX training. I have had a TRX for close to 2 years now and have just started using it more and more in the recent months. I have wanted to do the training course for quite some time now but just couldn’t fit it into my training schedule all summer due to the whole swim, bike, run thing. Since it’s the off season and I plan to utilize the TRX in my own workouts, it was a good time to get trained. Now, in case you ever hear someone say they are “TRX certified,” that is a misconception. No one is a certified TRX trainer. There is no test after the course and thus you are not certified. You are only trained in the TRX suspension system. I didn’t know that before the class so that’s a little FYI for you.

For the most part I have done all the presented TRX moves with my old personal trainer and also on my own during training. However, the course was not boring at all. My class was small. Only 6 of us so we got lots of individual attention. It was never sit down and listen to the instructor lecture. We were constantly moving around and doing the various exercises. What’s the best way to learn something? By doing it of course! We also broke down into pairs and taught each other the moves. I enjoyed this part the best because as a trainer you need to be able to explain the exercise clearly for a client to understand and be able to perform the exercise correctly and safely.

My class of folks was quite interesting. Half of us had used a TRX before and the other half have never even touched one before so that was quite interesting. I was the youngest person there and the one with the most experience. A couple of the guys there were retirees and decided to become personal trainers as a second career. One woman was a personal trainer and also a fitness/body builder competitor. Another woman was a physical therapist who spent years correctly people’s problems and injuries and then decided a couple of years ago to open a fitness studio to hopefully “fix” people before they start to have problems.

The instructor was pretty awesome! She is the owner of the studio we were at, Club Xcel, and also an elite trainer for TRX. She is well-known within the fitness community and also a competitive cyclist! The best part of the day was when she let us play with the TRX Rip trainer. I had asked her earlier in the day if she had one because I was curious about them. I had seen them online but I don’t believe anyone in Maine has one. We’re always behind in the times… The Rip trainer is just awesome! I just purchased one and hopefully will take a course this winter when they had a class at Club Xcel.

The TRX suspension trainer was developed by a Navy Seal for military training. Suspension training workouts given participates an edge over conventional strength training (i.e. lifting, machines, etc.) because every exercise builds true functional strength and improves flexibility, balance, and core stability all at once. There are a lot of suspension training systems on the market now, but what sets TRX apart from others is the fact it has a single anchor. That single anchor means that your core is always being worked because your body is constantly trying to stabilize itself. As most athletes know, core strength is essential for performance and strength. If you have a weak core then chances are you are not as powerful as you can be and also more prone to developing injuries. The off-season is the perfect time to work on core strength! 🙂

So, what is the Rip trainer? A pretty awesome training tool if you ask me! The Rip trainer uses a resistance cord system to create a variable, unbalanced load that allows the participate to develop core strength, explosive power, flexibility, and endurance through movements that are conducive to everyday life and sports. Many pro athletes utilize the Rip trainer, such as Lance Armstrong and Drew Brees.

There seems to be a misconception with the TRX. Many people are intimidated by them and think TRX’s are only for athletes. That’s not true at all! The TRX can be used by everyone and every exercise can be modified for the beginner to the advanced person. If you have ever experienced working out on a TRX then you know it can give you one kick-ass workout that will leave you crying the next morning. Unfortunately, many trainers and/or gyms do not use or offer TRX training. I’m guess part of it may be due to liability, more so for the gym environment then the trainer. Many trainers (and people in general) are still stuck in the traditional and conventional methods of training, such as olympic lifts, machines, treadmills, etc. In the recent years functional training has really become mainstream. Functional training is a form of training that involves exercises that generally work the entire body and have a direct relationship to movement patterns you do it your daily lives. If you frequent a gym often you will see a lot of people utilizing machines to work different muscle groups. Machines definitely have a time and place, but the problem with machines is that you are isolating one (or a couple) muscle group and working just those muscles. When in life do you ever just use your biceps or your hamstrings?

Anyway, if you ever want to try a TRX workout let me know! 🙂