Note: This will be a multi-part series on the core and the proper ways to train and engage the core throughout exercise.

The Core. You’ve probably heard this term thrown around the fitness world in the recent years. But, what does the term really mean?

The core can be described as a muscular box with the abdominals in the front, the paraspinals and gluteals in the back, the diaphragm as the roof, and the pelvic floor and hip girdle musculature as the floor.

The core is often referred to as the body’s “powerhouse” because its the central region providing a girdle of strength and connecting the abdomen with the lower back and hips.  The abdominal muscles in conjunction with the spinal muscles, create a stable base for generating strength and providing support for all movement.

The core plays a vital role in everyday biological functions, including creating internal pressure within the abdominal cavity, holding the internal organs in place, and helping with the expulsion of air from the lungs and of bodily waste. The core musculature provides an axis of power for the kinetic chain.

The kinetic chain is a movement system consisting of myofascial (muscular), articular (joints), and neural (motor) components. Each of these individual elements are dependent on each other for optimal performance during movement. In layman’s term, every part of the body is connected and work together to produce movements. 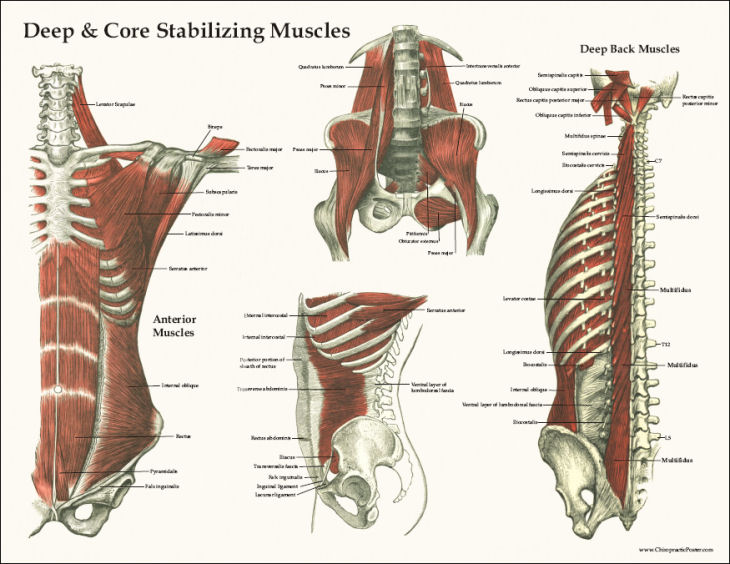 Let’s break the core down into its core anatomy (no pun intended 🙂 ):

Paraspinals – There are two major groups of lumbar extensors that make up the paraspinals: the erector spinae and the so-called local muscles (multifidi, rotatores, and intertransveri). The erector spinae is a group of three long tendinous muscles that run the length of the spine. The muscles provide support for spinal flexion (bend forward) and extension (bend backwards) and also aid in stabilizing the spine against sideways movement. The multifidus is a deep series of muscles attached to the spine that work to keep the spine straight and to help stabilize it and to maintain good posture. Atrophy (muscular wasting) of the multifidi has been found in people with lower back pain.

Quadratus Lumborum – The quadratus lumborum is a large, thin, and like the name implies, quadrangular-shaped, muscle that directly inserts into the lumbar spine. The quadratus lumborum works to stabilize the spine against lateral movement, lifting heavy objects, and carrying items in one hand, such as a suitcase or groceries.

Hip Girdle Musculature –  The hip musculature plays a huge role within the kinetic chain, especially for all ambulatory activities, in stabilization of the trunk and pelvis, and in transferring force from the legs to the pelvis and spine. The hip musculature includes the psoas muscle group and gluteus muscle group. The psoas (hip flexors) control flexion movements of the hip, such as walking, running, and going up and down stairs. The gluteus minimus is the smallest of the glutes and lies beneath the gluteus medius. It works to lift the leg outward (abduction) and internal hip rotation. The gluteus medius lies between the minimus and maximus. It assists with abduction and rotation (internal and external) and provided stability to the pelvic region. The gluteus maximus is the largest and most superficial muscle of the hips. It works to abduct and extend the hips, while also stabilizing the pelvic region. Poor endurance and delayed firing of the gluteus maximus and medius muscles have been linked to people with lower back or lower-extremity instability. Tight psoas can cause lower back pain by increasing compressive loads to the lumbar disks of the spine.

Stay tuned for parts II and III where we will discuss mobility, stability, and strength of the core musculature and ways to properly engage and train your core to become a stronger and more efficient athlete!