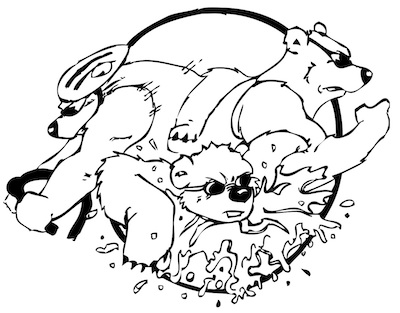 Going into this race I wasn’t sure what to expect. Honestly, I was about 90% sure I was going to DNF after the bike due to the major knee pain that I have been having. I saw my chiropractor on Thursday and she worked things out a bit and then taped up my knee to help with the patella tracking. I woke up Friday feeling great. After work I did my quick 20 minute bike and then 10 min run. Knee felt pretty good and towards the end a bit sore. I iced and rolled before hitting the sack. 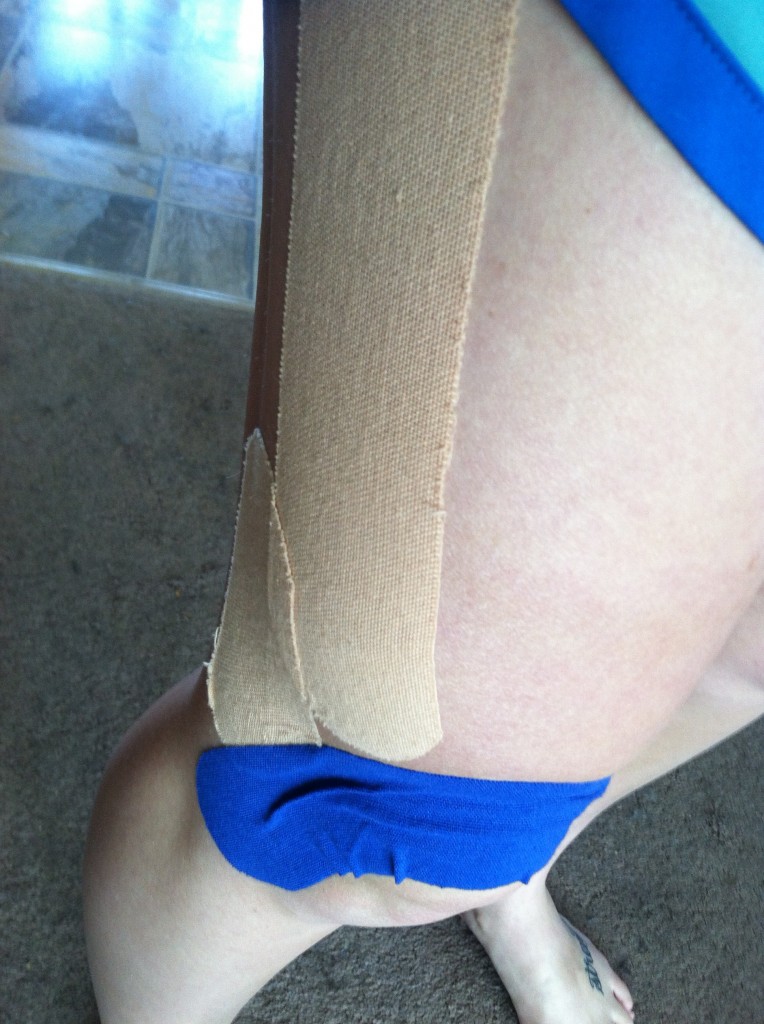 Woke up with a stiff knee. Awesome. Ate my breakfast and threw all my stuff into the car for the 1+ hour drive to Brunswick. The race is a pool swim and thus only 32 swimmers could be in a wave at a time. I had to be there and set up in transition but 8:10am, but my swim wave didn’t start till 10am. Lots of sitting around and chatting time. My knee was definitely sore and I was visibly limping to and from my car to get my stuff. Not a good way to start a race morning. I met up with my fellow TriMoxie athletes and also saw some other athletes mingling about all waiting for their respective wave starts.

This was my first PolarBear Tri. It is considered to be the season opener for us Mainers who have to ride our trainers all winter long and swim in the pool until June when the lake water becomes tolerable (with wetsuits of course!). This race tends to bring out the big guns in the sport too so I was excited to see how I would do in a very competitive field. I was not expecting much at all due to my recent knee issue and the fact that my general fitness, and especially my speed, is pretty poor this year. My coach wanted me to race this race and I really wanted to. Of course, this was given to me before the knee became kind of a limiter. I told her before the race that if I felt good then I would race. If my knee was okay then I would just turn it into more of a training day. If the knee was causing a lot of pain then I was going to DNF after the bike. I was completely okay with a potential DNF too. It’s not ideal, but my ultimate goal this year is Lake Placid. A little sprint tri in Maine is not going to derail me from that goal.

The swim is a 525-yard pool swim. I didn’t bother to warm-up because I would have just sat around from 90 minutes waiting for my turn. This definitely put me at a bit of disadvantage because I am the type of swimmer that needs a lot of time to warm-up to truly find my groove. I chose a lane in the middle of the pool and luckily ended up having the lane to myself. The whistle went off and I found a comfortable pace and settled in a bit. My intention was to keep track of my laps, but somehow I managed to forget after the first 125 or so. Typical. About what I estimated to be the 300 mark I tried picking up the pace a bit. I felt okay. It wasn’t my best swim, but it was not bad. I tried not to kick too hard because of the knee. I finally got the “last lap” sign and I pushed it to the last wall. I struggled a little bit getting out of the water trying not to somehow tweak my knee getting out. I hit what I thought was the correct button on my Garmin 910XT, but turns out it wasn’t. Opps. From looking at my data afterwards it appears I hit the 525 mark at about 8:42. I then set out on a half jog/ half jumping on one foot to the transition area. My knee was definitely sore, but tolerable. The swim time (I’m pretty sure) includes the run from the pool to the TA so my time is a bit slower due to my inability to “run” like a normal person. I can’t imagine what I looked like when the Capstone Photography person took my picture leaving the building…

Transition went by quickly. I made sure not to dilly-dally around too much. I grabbed my bike and headed out on the long run to the mount/dismount line again with my awkward little attempt at running. I hopped on my bike and headed out on the 11-mile bike course. I hadn’t ridden the course before, but from what I was told that it was pretty flat with a few rollers. I had my Garmin Edge on my bike so I had turned that on in TA. The satellites took forever to find. I checked my watch to see my bike time, but didn’t realize that the watch was still set in swim mode. The course was relatively flat so I kept my power up and pushed it. The course was pretty empty, which was nice. I got passed by one speedy woman on a road bike and tried to keep her in my sight the entire time. I then got passed by some big guys flying on their tri bikes. I let them go since I had absolutely no hope in catching them. There were some upgrades at times so I ended up doing a lot of shifting to keep my power consistent and my cadence in a good range. My Power VI was 1.08, which is pretty damn good for me! 🙂 Even though the course is pretty flat, it has a lot of sharp corners. I’ve always been pretty timid going around corners, especially sharp ones, but I have made a good effort to get over my fears. I did super good today not slamming on my brakes and really riding the corners and then accelerating hard out of them. I’m quite happy with my bike performance. I was second in my age group for the bike split. I missed the top slot by 5 seconds. I probably lost those by trying to go the wrong way into the TA after dismounting. Opps! Knee felt good on the bike so I made the decision to run.

Transition went fairly quickly. I found my rack quickly, hung Azul up and grabbed my running shoes and headed out. The first 300 yards or so were very painful. I thought about just throwing in the towel, but made the decision to keep going. I made it this far and after having a great bike split I knew that I could be on my way to a podium finish in my age group. I just needed to keep my legs moving. The first part of the run was on the baseball field. My legs definitely did not like the long grass. I focused on taking short steps and moving forward. Then it was a quick jaunt on the trails and then onto the road. The further I got the better my knee began to feel so I kept moving. I passed a few people and a couple of people passed me. Finally I came to the first aid station and ran through it. I knew the first mile was almost done. During transition I realized that my watch was messed up so I was able to set it in run mode. Because of the pool swim I had no satellite data. Luckily I knew this would be a problem and put my foot pod on my shoes before the race. I hit mile one around 9:50ish. Not my fastest at all, but I was okay with it. I was running and that was what mattered. A 54-year-old woman cruised by me at this point so I picked up my pace. Funny thing was the faster I seemed to run the better my knee felt. Around the 1.5 mile mark we turned onto dirt trails. There wasn’t many people on the course so it was a bit lonely. I hit the second mile at a 9:11/mile pace so I know I doing better. My goal at this point was to negative split the run and also not get passed by Tammy, a super fast TriMoxie athlete who started about 20 minutes behind me in the pool waves. I knew since she was super fast that she might pass me in the run so I wanted to make sure that didn’t happen. Plus it kept me motivated to keep moving. The third mile was a bit mentally tough. We looped back on the same dirt trail again and I could feel my knee pain again. I just knew I needed to make it to the finish. I passed a 65-year-old man in the final yards of the run. I crossed the finish line and limped my way over to the Med Tent to get ice for my knee. 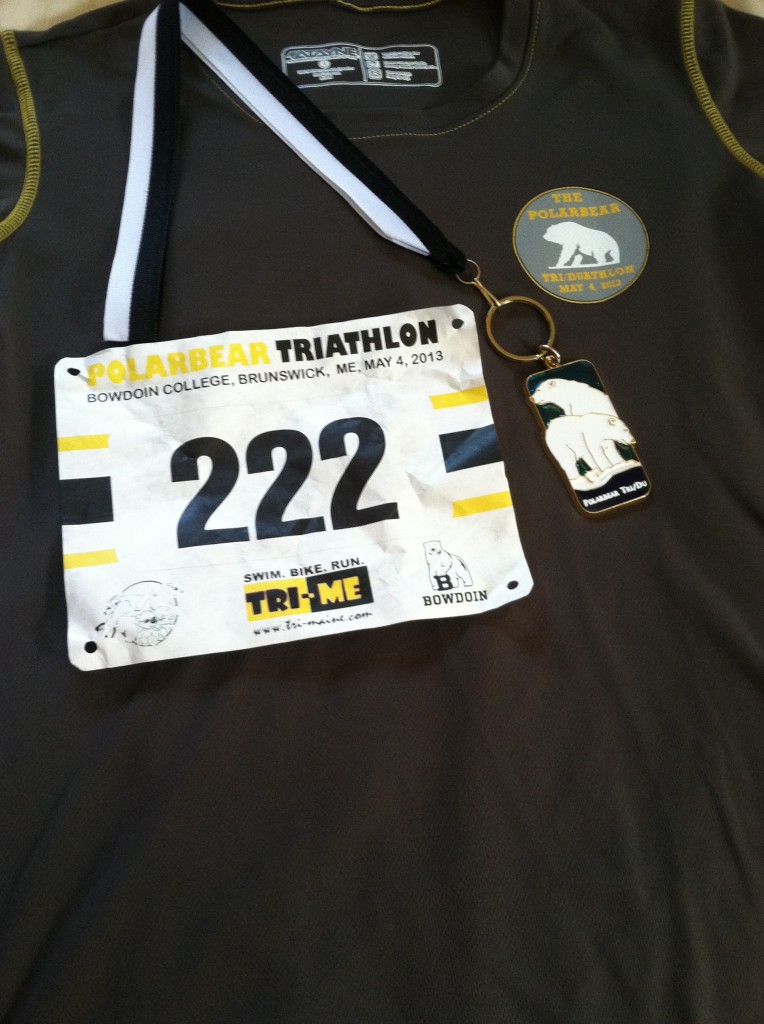 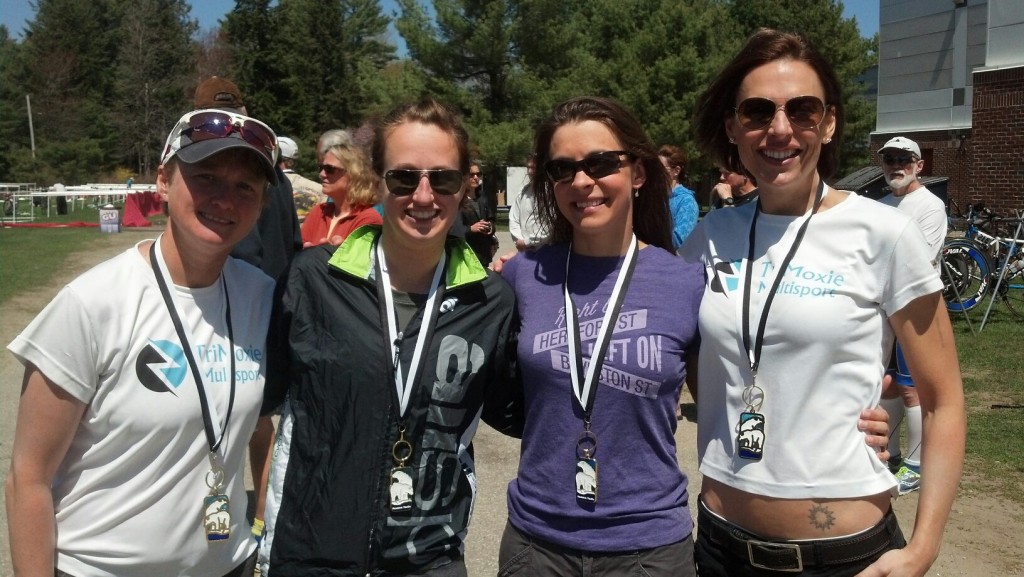 Overall, I’m pleased with the result. Obviously, I wished my knee would not have been an issue so I could have pushed it more, but it is what it is. I know my speed isn’t there and my general fitness is lacking. However, I had a good first race. My transitions were good. I didn’t stand in TA and play with my watch forever like the Y for the Tri race last year. I went in, did my business and left. I had a great bike split and I did manage to pull off a decent run split. My knee was definitely sore Saturday after the race and I spent a long time icing it. Hopefully, we can get this knee issue figured out so I can start running again without pain. Ironman Lake Placid is in less than 3 months! Yikes!

One thought on “Race Report: The PolarBear Sprint Tri”