I spent Thursday and Friday in Short Hills, NJ for my USAT Triathlon coaching certification clinic and didn’t arrive home to my bed until 2am Saturday. Unfortunately, it was also an early morning. I had a personal training client at 8am and then a few more throughout the day. There was definitely a lot of yawning going on!

One of the lectures at the clinic was on run training and I was super pumped for my run on Saturday to work on some running drills during my 45-minute run. We talked a lot about run gait analysis so I really focused on proper run form throughout my run and I actually felt pretty good with it. If any of you have ever seen me run I have the “marathon shuffle.” It’s not a horrible gait to have, especially if your niche is long-course, but I do want to focus on improving my gait so I become more efficient and also prevent future injuries, i.e. stupid plantar fasciitis that I have a tendency to get every year. 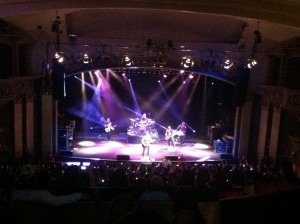 All last week I was looking forward to Saturday night because the GOO GOO DOLLS were playing in Portland! You have no idea how excited I was. Iris is my absolute favorite song and I can listen to it over and over again. I couldn’t wait to hear it live! The concert was awesome! They played a good mix of old songs (which tend to be my favorites) and some of their new stuff that will be on their new CD coming out in June. They ended their set without playing Iris. I was starting to get a little upset when they came back for an encore. Thank God! They played a new song and then they played it! They played my absolute favorite song! And guess what? It’s AMAZING live! Totally made my life at that moment. Okay, maybe finishing an Ironman will do that too in a few short months!

As you might guess, I slept in on Sunday. I was physically and mentally tired from a long week. I caught up on some TV shows while eating breakfast and moved quite slowly all morning. I had a 3 hour ride plus a 25 minute T-run on the schedule. It was sunny in the 50s and windy. I honestly was dreading the workout. Part of me what to push it to Monday, but I didn’t want to mess with my schedule too much since I know there is a rhyme and reason (no pun intended 😉 ) to my training plan. By 1 pm I knew I had to get out on the road so I bundled up and pumped Azul’s tires up to finally hit the road. I had an idea of my intended route, but nothing set in stone. I headed up towards Standish and was planning on riding up Route 25 for 1.5 hours and then turning around and coming back. I made my way up Route 25 and then in Baldwin decided to take the right onto Whaleback Rd. If you like hills and climbing then you will love Whaleback Rd. It’s a slightly shorter version of the epic Mooseman climb. It’s definitely a badass hill to train on for Lake Placid. Once I got to Route 113, I decided against my normal route and headed back up Route 25 towards Gorham while hitting some nice Lake Placid-style hills. I climbed over 1500 feet over the course of 43 miles. Not bad for my second ride outside for the year! The last 20 minutes or so of my ride was rough. The headwind picked up a bit and my legs were getting tired. I was barely crawling at 10mph. I was convinced someone tired a cement block to the back of my bike. I actually stopped at one point to check to see if I had a flat because I couldn’t figure out why I was moving so slow… Finally I made it home.

I decided against my T-run because my right hip is out again and it’s causing some irritation in my knee. I don’t want to risk any injuries until my hip is back where it should be. I have spent a great deal of time the past few days foam-rolling the crap out of my lower body. Yesterday I hit up a yoga class and holy cow was my body tight. Yoga actually hurt. Any pose that involved stretching the right hip was painful. Thank goodness I see my Chiropractor on Thursday!

This week is a big week in training so crossing my fingers that everything goes well.