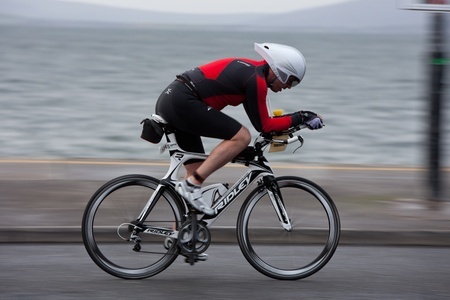 Last evening I had a 90 minute endurance zone ride on my training schedule so I figured I would ride from work and check out the Rev3 Maine Olympic Bike Course. I’m very impressed and excited about the HIM bike course so I had a feeling this course would be equally enjoyable. I was a bit surprised to find that the Olympic course is more challenging than the HIM course, at least in my opinion.

I didn’t ride the first 3 miles of the course since I rode from Rt 1 in Scarborough (which is quite the adventure to ride in rush hour traffic). However, I have ridden those miles a couple of times before and they are relatively flat or a false flats with a wide shoulder. The rode is a little beat up in areas so you have to be aware of that when riding, but no gaping craters like some roads in Maine. Once you cross over Route One to Flag Pond Road, things get nice. There is not a wide shoulder or really any shoulder on the road, but conditions are nice (minus the trash I saw on the side of the road for the first time! Grr… I hate when people throw their trash out their window!). Both the HIM and Olympic follow this route. You must climb the bridge over the Turnpike, which is a quick but annoying little bugger! Once over the bridge and back down the HIM people will make a left turn onto Jenkins Rd, but the Olympic people will continue a little further up to take a right hand turn onto Hearn Rd. The very beginning of Hearn Rd is a slight uphill so you might consider gearing into a slightly easier gear to get up over the slight increase before settling in for the long haul.

The Olympic course is an out and back route that also follows some of the same roads that the HIM people will ride at the end. I’ve ridden Ash Swamp Rd (which I now affectionately refer to as Swamp Ass Rd because of my very wet ride of the HIM course last weekend) and Hearn Rd, but only from the HIM direction. The Olympic course rides those roads in the opposite direction heading out into Scarborough/Hollis and then you return on the same roads. Having ridden Ash Swamp Rd and Hearn Rd before I assumed they were flat and fast. Well, in the opposite direction, it is actually a false flat. I was cruising along in my endurance zone when I looked down and realized that my speed had slowed and I was pushing way too many watts. Definitely a false flat! The roads are in good condition, but surprising a lot of false flats. Don’t get discourage here. The out portion of the course will probably be slower than the back portion when your going in the opposite direction.

Once you reach the 4-way stop sign at the end of Ash Swamp Rd you go straight across to Waston Mill Rd. This road is the hardest road of the course in my opinion. It has a decent hill. You will descend down a small hill, cross over a bridge with a slight turn, and then ascend a rather short, but fairly steep hill. It’s enough of a grade that you might even want to consider hopping out of the saddle to climb. As you approach the crest of the hill you will see an orange sign for ice cold lemonade! Not sure if Rev3 will be serving any of race day, but you could try!

After the hill you will hit a nice little stretch of new pavement with pretty views of farmland and flowers in hay fields. Even a tractor for sale if your so incline to buy one. Not sure if it works though. There was a significant headwind on this stretch and actually for most of the course. Perhaps it was just last night that I was riding, but it’s possible that on race day to have a good headwind in this area and other parts of the course.

Next is a left onto Tapley Rd, which again is fairly flat and fast road. It’s really shaded in this area, which will be nice if it is a hot and sunny race day. I was riding it around 6:30pm so it was rather dark in areas. The road conditions again weren’t that great. Very little shoulder and some pavement cracks.

At the end of Tapley you take a left onto Deer Run Drive and ride through the little neighborhood. This was completely flat and fast and kind of a nice little break from the course. The right hand turn back onto to Tapley is a little sharp so beware of that. Once you make the turn back onto Tapley you have reached the half way point!

The rest of the course just follows the same route back. You’ll hit the hill again on Watson Mill Rd. To ride this hill (which I actually did three times for kicks and giggles!), I would suggest to gear down to your hardest gear and push yourself down the hill (go as fast as you feel comfortable or until you gear out and coast) until you reach the bottom of the hill to begin climbing. Ride as much as that speed as possible up the hill where you either want to jump out of the saddle to finish the climb or gear up to an easier gear and spin up the remaining back of the hill. Personally, since it’s an Olympic distance race and the hill has a decent pitch, I would choose climbing out of the saddle.

Riding back on Ash Swamp Rd and Hearn Rd is a little easier because you have the slight grade down. However, in parts there is still a slight false flat. Once again you’ll have to ride over the Turnpike overpass back to Route One. The ride down Cascade Rd will be a bit better this time because it has a slight down grade to the finish.

Overall, I think the Olympic course is slightly more challenging than the HIM. It has more false flats and a decent little technical climb on Watson Mill Rd. The road conditions in areas were pretty bad and a majority of the roads had little to no shoulder. However, almost all the roads are rural side roads so traffic shouldn’t be an issue. The headwind was quite bad when I rode the course last night. I’m not sure if it is the norm or I was just riding on a windy evening. Just be aware that there is a potential headwind that will slow you down slightly. The course will be fast. Just don’t get discouraged by the false flats and ride smart. The out portion will probably be slower than the return portion. I’ll be interested to see what people’s opinion of the Olympic course will be.

The Rev3 website does not give elevation charts for the bike courses so I mapped them out on mapymyride.com to get an idea of what the elevation actually looks like. I can also look at my Garmin data too (remember to use elevation correction when uploading data because if you don’t Garmin will lie to you…)

As you can see from the above charts, there really is no climbing compared to courses such as Mooseman, Quassy, or Lake Placid. The hills on the HIM course are slightly longer and more gradual. But there are only a few. Most of the course is flat and fast with wide shoulders. The Olympic course is mostly flat with several stretches of false flats, one decent hill you’ll hit from both sides and all on rural side roads. Either way, it’s a good course. Here’s to good weather on race day!