Looking for a good book? This is one MUST READ book! I enjoy listening to podcasts while working sometimes. My favorite podcast is Vinnie Tortorich, America’s Angriest Trainer. I HIGHLY recommend you listen to his podcast and then go out and buy his bestselling book, Fitness Confidential. I will be doing a book review of that very shortly. Vinnie has always recommended Dr. Robert Lustig’s Fat Chance: Beating the Odds Against Sugar, Processed Food, Obesity, and Disease on his podcast and after IMLP I finally had some free time to pick it up and finish it. 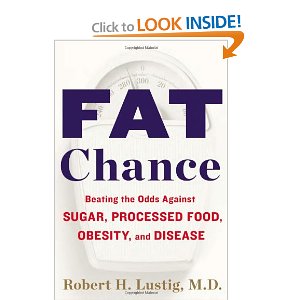 I’ve read a lot of books within the past month and Lustig’s is by far the best one to read. I think this book should even be a required reading book in high schools and college. That’s how much I think everyone needs to read this book. Go buy it. Now!

Who is Dr. Lustig? Well, he is an internationally renowned pediatric endocrinologist who has spent the past 16 years treating childhood obesity at some of the top hospitals in the world, such as St. Jude’s Children’s Hospital and UCSF Benioff Children’s Hospital. Sooo… I would say that he knows his shit better than those Jillian Michaels and Dr. Oz characters.

Dr. Lustig became famous for his at-the-time, very controversial you-tube video called “Sugar: The Bitter Truth.” And, yes, I think you should watch that too. Fat Chance documents the science and politics that have led to the current obesity pandemic that no longer just affects the United States, but the entire world. I went on a medial mission to Costa Rica and Nicaragua in 2011 and I was surprised beyond belief the number of overweight and obese people and the number of fast-food joints in those countries. Hell, Costa Rica has a Denny’s!

Lustig reveals and outlines all the bad research that has been conducted over the years by the government and big food. Personally, I think a lot of those scientists who were involved in many of those studies should have their PhD’s removed. It’s rather disgusting how many people will sell-out to the food industry and politicians. Ok, end rant.

The book begins by setting up a valid argument why the government’s view of “calorie in, calorie out” is bullshit. I hate that term. When discussing food with my clients I always ask them “what is a calorie?” No one has yet to answer correctly. It’s because we have been brainwashed over the years to think of food as calorie in, calorie out. That’s how you’re suppose to lose weight, right? Wrong! Believe me, I was one of those people for a long time too, but the more I read (from reputable and educated sources!!) the more I learn that I have been completely duped all my life. Lustig is an endocrinologist meaning that he is a specialist in hormones and the biochemistry of the human body.

Lustig talks a lot about hormones, ya know, since he gets hormones. Hormones have a profound effect on our metabolism and how we view food. Fat Chance outlines ways to readjust our key hormones that regulate hunger, reward, and stress. That is done mainly by eliminating sugar. Sugar is an addictive toxin to our bodies. We live in a society today that thinks dietary fat is bad. Low-fat this and low-fat that. Well, guess what happens when you remove fat from food products? The food tastes like crap and the manufactures pump it full on sugar. Read the book and find out why sugar is bad for you. I’m serious, do it.

The evolution of nutritional science is what really fascinates me. Back in the early to mid-1900’s we got the science right. And then big food and some idiots got involved. The leading cause of death today in the United States is heart disease, but in the next decade or so we will see that shift to diabetes and other metabolic-related diseases, which heart disease can be considered one. In 1957 John Yudkin, a British physiologist and nutritionist, postulated that a dietary component caused heart attacks. By 1964, through natural observation studies he theorized that the consumption of sucrose was associated with heart disease. Yudkins published numerous papers on the biochemistry of sucrose and was the first person to warn us that excessive consumption could lead to heart disease, diabetes, GI diseases among other diseases.

Now, back in the United States we have Ancel Keys, a Minnesota epidemiologist. In the early 1950s Keys spend some time in England where we witnessed a large rise in heart disease. The typical English diet consisted of high fat and high cholesterol items, such as fish and chips. He noticed that those who are well fed in both the US and UK were those who could afford meat, but also seemed to suffer the most from heart disease. In the 1960s and 1970s Keys published numerous studies indicating that heart disease patients had higher cholesterol levels than non-heart disease patients. In 1980 Keys published his “Seven Countries” study, a 500-page paper that concluded that dietary fat was the single cause of heart disease. Which, the United States government and medical community has since run with. However, there are four major problems with his thesis.

The first being that his Seven Countries study started out as a Twenty-two Countries study. The seven countries he used in his study were: Japan, Italy, England, Wales, Australia, Canada, and the US. The relationship between dietary fat and heart disease looked quite convincing when the data was plotted. However, when he plotted the other countries (Austria, Ceylon, Chile, Denmark, Finland, France, Germany, Ireland, Israel, Mexico, Netherlands, New Zealand, Norway, Portugal, Sweden, and Switzerland), the correlation was almost non-existent. He also actively chose not to include indigenous tribes, such as the Inuit, Tokelau, and Maasai and Rendille, who eat only animal fat and have the lowest prevalence of heart disease on the planet. How’s that for science? Second, the role of dietary fat in heart disease is complicated by trans fat, which has signficant scientific studies to link it to metabolic syndrome. The use of trans-fats peaked during the 1960s and most likely were not considered a variable by Keys.

Third, if you look at the correlation itself, it is a problem. Japan and Italy eat the least amount of saturated fat and have the least amount of heart disease. But, they also eat the least amount of dietary sugar out of all the countries included. How do you know if it’s the sugar or the fat causing heart disease? Fourth, Keys admits that he correlated sucrose with saturated fat, but it was not important enough to him to remove sucrose from the equation. When one completes a multivariate correlation analysis, a common statistical tool that determines whether A causes B regardless of the impact of C, D, and E, one has to do the calculation both ways. In other words, Keys would have had to hold sucrose constant and show that dietary fat still correlates with heart disease. Basically, Keys used bad science. And then the government took it and ran with the idea.

Overall, you will be crazy not to read this book. Out of all the books I have read this year, this is by far one of the best ones out there. It will change your view of nutrition and the obesity epidemic. Lustig gives you the science that backs up his claims. This isn’t a diet book written by some bimbo Hollywood trainer on how to lose 10-lbs in 10 days. It’s a real book based on real science that will open your eyes and mind to the current nutritional crisis in the United States.

What are you waiting for? GO BUY THE BOOK! 🙂